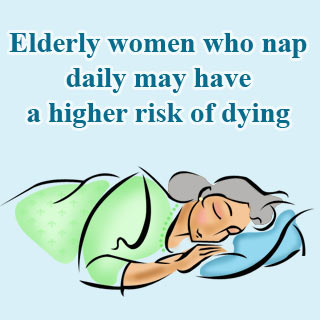 Napping may undoubtedly be one of the favorite hobbies of many people. However, excessive daily napping has been found to influence mortality risk in elderly women. The women, who reported having slept daily, apparently were at a greater risk of dying.

These findings contradict with the earlier studies which had stated that daily napping had beneficial health effects. The findings of the present study were achieved by monitoring more than 8000 Caucasian women. These women aged 69 or above were studied for a period of seven years.

The study investigators state that these findings should not be misconstrued to mean that napping is directly linked with poor health. They state that napping could take place as a result of an underlying sleeping disorder or other medical conditions.

More detailed studies need to be conducted in order to effectively analyze the link between napping and increased mortality risk.

Their findings are present in the Journal of the American Geriatrics Society.