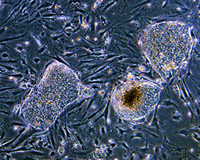 British scientists have developed a revolutionary technique which they claim could cure blindness in people suffering from age-related macular degeneration (AMD).

AMD is the most common cause of blindness in the elderly.

The technique that was developed by scientists and doctors from the University College London, Moorfields Eye Hospital and Sheffield University, could transform lives, allowing the blind to regain the ability to carry out everyday tasks such as reading or driving.

The method centers on human embryonic stem cells grown in a lab that can turn themselves into different cell types and are used to create small patches identical to the damaged eye cells in AMD patients.

Packaged into a syringe, a patch is injected into the back of the eye where it replaces damaged cells and restores sight. For this, healthy cells are taken from the corner of the patient’s own eye.

However, such surgery is extremely complex and time-consuming as well. It is unlikely to be suitable for large-scale use.

Scientists are now working on making “readymade” patches, which will be injected into the back of the eye under local anesthesia in a procedure that lasts no longer than one hour.