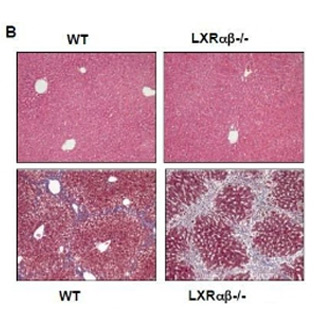 A key regulator of cholesterol and fat metabolism is involved in the development of liver fibrosis, or at least the following piece of information suggests so. UCLA scientists assert that the main regulator of cholesterol and fat metabolism plays a significant role in building collagen scar tissue that can develop into cirrhosis. Further cirrhosis may lead to premature death and can’t be treated without a liver transplant.

During the investigation, it was noted that liver X receptors (LXRs), master regulators of cholesterol, fat and inflammatory gene expression, regulate the fibrosis-making cells of the liver, known as hepatic stellate cells. In case of chronic liver injury, stellate cells seemingly become activated and trigger an inflammatory, fibrotic cascade that builds collagen scar tissue within the liver. When stimulated, LXRs supposedly ‘turn on’ various genes that help create proteins for carrying out bodily processes in cells. These cells may transport and excrete cholesterol to synthesize fat in the liver.

“A ‘holy grail’ for liver researchers is to develop anti-fibrotic treatments that target activated stellate cells in order to slow or prevent the development of cirrhosis. Our study offers the first detailed look at how LXRs specifically impact the activation of hepatic stellate cells and the subsequent development of liver fibrosis in animal models,” said lead investigator Dr. Simon Beaven, an assistant professor of digestive diseases at the David Geffen School of Medicine at UCLA.

Experts believe that LXRs normally aid in decreasing the collagen-producing actions of stellate cells when ‘activated’ by liver damage. In this research, scientists tested that way activated stellate cells taken from mice would react when a chemical that induces LXR activity. Among stellate cells from normal mice, LXRs seemingly suppressed the inflammatory and fibrosis-promoting program.

“This finding, along with the cell culture studies, suggests that LXRs’ influence on fibrosis most likely resides in altering stellate cell function in the liver,” Beaven said. “This is a critical finding and opens an entire new field of study for stellate cell biologists.”

However, cells taken from mice genetically lacking LXRs possibly had the same program of genes dramatically elevated as the inhibitory effect of LXRs was absent. LXRs apparently dampen stellate cell activation by repressing inflammatory and collagen-producing genes. In order to estimate the strength of the response, experts took the medium from the cultures of LXR-deficient cells and added it to stellate cells from normal mice. These cells then reported exaggerated inflammatory and collagen-producing response. Hence, LXR-deficient stellate cells presumably are secreting signals to promote fibrosis.

Further investigations will be undertaken to detect which genes in stellate cells are activated by LXRs and analyze the probable role of cholesterol metabolism in the fibrotic response.

The research is published in the March issue of the journal Gastroenterology.