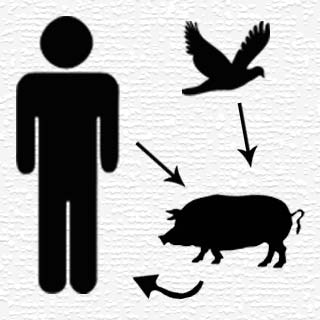 With the latest outbreak of the swine flu epidemic, people may be curious as to the cause of the disease. Keeping this in mind, we are reporting about a latest research which was undertaken by the experts from the University of Maryland.

These experts are said to have evaluated the underlying transmission of combined avian-human viruses, along with providing additional information on what gives birth to virus outbreaks like swine flu.

They have demonstrated that post the unison of avian and human-like viruses, the virus may require lesser mutations to spread through respiratory droplets among mammals. Associate Professor Daniel Perez, University of Maryland, explains, “This is similar to the method by which the current swine influenza strain likely formed. The virus formed when avian, swine, and human-like viruses combined in a pig to make a new virus. After mutating to be able to spread by respiratory droplets and infect humans, it is now spreading between humans by sneezing and coughing.”

It has further been stated that the avian flu virus affects birds while the human virus affects human beings. Generally after being infected, the immune system of both birds and humans may be familiar with the virus, therefore they may have a certain degree of immunity from getting infected again. There may be a possibility of avian flu infecting human beings as well; however since it has a low rate of virus transmission from one human to another its spread may be restricted.

Having said this it was also pointed out that the entry of an intermediary species which can act as a host to both the viruses could prove to be very dangerous. In other words, it could get very complicated if an intermediary species like a pig may be capable of hosting both the avian virus as well as the human-like virus. In the case of a pig getting infected with both these viruses, it could give rise to hybrid avian-human viruses, which may have the ability to infect humans as well. Since such a virus may seem unfamiliar to the human immune system, it may evade the body’s immune response. It was previously believed that these viruses may not get easily transmitted, but these researchers seem to have stated otherwise.

The researchers have further stated that the present lot of vaccines may not prove to be very useful against the avian H9N2 influenza virus, known to be one of the viruses on the list of potential human pandemic. These experts believe that this should be kept in mind while planning to design an appropriate vaccine for avian flu. They have concluded the study by stating that more studies may be required to better evaluate the cause of virus transmission, following which it may be possible to design a suitable vaccine.

The research was presented in the Proceedings of the National Academy of Sciences.