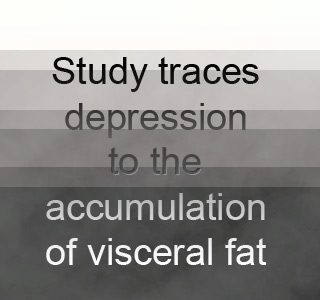 There seems to be numerous data to support the link between depression and higher risk of developing cardiovascular disease. However the process through which they were associated with each other was said to be quite blurry. But now the investigators from the Rush University Medical Center seem to have provided evidence on this mysterious association.

These experts have stated that depression may be associated with visceral fat, which is deposited between the internal organs at the waistline. This type of fat is long believed to be responsible for increasing the risk of developing diabetes or cardiovascular diseases.

Principal investigator, Lynda Powell, PhD, chairperson of the Department of Preventive Medicine, Rush University Medical Center, says that, “Our results suggest that central adiposity – which is commonly called belly fat – is an important pathway by which depression contributes to the risk for cardiovascular disease and diabetes. In our study, depressive symptoms were clearly related to deposits of visceral fat, which is the type of fat involved in disease.”

In order to assess this factor, the investigators analyzed more than 400 women. Half of these middle-aged women were said to be African-American, while the remaining were Caucasian. All these women were said to be a part of the study on the menopausal transition, called the Women in the South Side Health Project in Chicago.

The depression symptoms in these subjects were believed to have been measured through a commonly used screening test, while their level of visceral fat was gauged through a CT scan. Normally, waist size was believed capable of acting as a marker for estimating the amount of visceral fat in an individual. However this technique may not be very reliable because the waist may also include the fat which is deposited below the skin, i.e., the subcutaneous fat.

It was observed that there were higher traces of depression and visceral fat association in the women who were overweight or obese. It was presumed that depression generates visceral fat deposit through particular chemical changes in the body. The investigators concluded by stating that a deeper analysis needs to be conducted before the precise procedure for this association may be revealed.

This study appears online and will soon be published in the Psychosomatic Medicine journal.