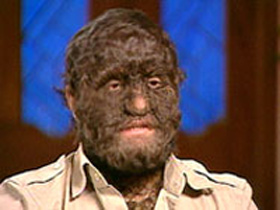 We’ve all heard the werewolf legends: When the moon grows full, so goes the legend, a man is transformed into a beast — he grows hair, and acquires awesome powers. But what if it weren’t the light of the moon but rather genetics that gave the werewolves of legend all that hair? The powers, though, remain the stuff of myth.

For Danny Ramos Gomez, 23, genetics is the reason people call him “the wolf man.” Danny has a condition called hypertrichosis, which causes his body to produce an abnormal amount of hair everywhere. Danny’s 26-year-old brother, Larry, also has hypertrichosis. The brothers are known for their daredevil feats in a Mexican circus.

But when they were little, it was different. They were both part of a freak show, exhibited like animals and called “wolf children.”
“They kept them locked up, and they wouldn’t let them come out until show time,” said Betty Tampa, a circus performer partner of Danny’s. “They were locked up inside a trailer. They couldn’t even go near the curtains.” Danny said he was too young to remember how it felt being in the circus. But Mundo Campo, whose father owns the circus in which Danny now performs, will never forget.

“So [the brothers] were in a cage inside, and they were sitting in two chairs,” Campo said. “I told my father about it and said, ‘You know, the saddest part of this is they’re never going to be out of this cage, right? They are going to be in the cages forever.'” Campo convinced his father to hire the boys and train them in the circus arts.

“We began working as magicians. Then I started on the trampoline, and from the trampoline I went to become a trapeze artist,” Danny said. “Someday I want to work in the large circuses in order to be more popular, not with the public but with the circus people.”

Except for his excessive hair, Danny is by all other accounts normal. But there are still people who view him as a freak.
“They perceive him as a wolf — actually, as a person from another world, and they insult him,” Tampa said. “They say things to him and they howl at him.”

Danny said some people do treat him badly. “I don’t take it seriously. I know who I am inside.”

Danny is perhaps the least affected by the way he looks, and he said he’s just a normal guy. “I play football, I play video games,” he said. “I go to the movies. I am the same as everybody, except what you see on my face, that’s all.”
One of his closest friends is Robbie, Campo’s 5-year-old son, who accepts him inside and out.

Robbie remembers the first time he saw Danny. “I thought something was gonna happen,” he said, “because first I believed in monsters and wolves and everything.”

Children are Danny’s greatest fans. During his performances, he mesmerizes them with his skills as much as his appearance.