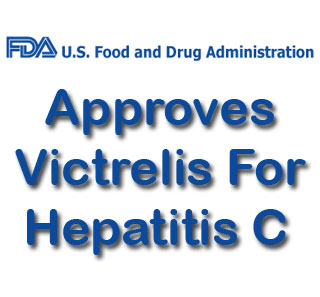 A large number of liver transplants conducted in the U.S are known to have been caused due to progressive liver disease. This is in turn is suggested to be a result of hepatitis C virus infection. In order to treat patients suffering from this serious disease, the U.S. Food and Drug Administration has given the nod for Victrelis (boceprevir). The drug should help in the treatment of individuals having chronic hepatitis C.

Approved for use in combination with peginterferon alfa and ribavirin, Victrelis is employed in patients who may show a certain amount of liver function. In addition patients who not have been subjected to earlier treatment with drug therapy for their hepatitis C or who have not been successful in treatment of this kind are also included. Scientists analyzed both how safe and effective the drug was in two phase clinical trials including 1,500 adult patients.

Approximately two-thirds of the patients who were being administered Victrelis together with pegylated interferon and ribavirin showed a notable boost in sustained virologic response in both trials. This meant that the hepatitis C virus wasn’t identified in the patients’ blood even 24 weeks after the treatment was stopped. This was in comparison to patients receiving pegylated interferon and ribavirin alone which is known to be the existing standard of care.

HCV infection is apparently cured in the event a person maintains a virologic response even after the treatment has been completed. The consequences of sustained virologic response can be many – from reduction in cirrhosis and liver disease complications to liver cancer and overall mortality rates also being decreased. This approval is significant mainly because most people with hepatitis allegedly don’t show the disease symptoms until occurrence of liver damage and this may take many years.

“Victrelis is an important new advance for patients with hepatitis C,” mentioned Edward Cox, M.D., M.P.H, director, Office of Antimicrobial Products in FDA’s Center for Drug Evaluation and Research. “This new medication provides an effective treatment for a serious disease, and offers a greater chance of cure for some patients’ hepatitis C infection compared to currently available therapy.”

More often than not the initial infection with HCV is followed by the development of chronic hepatitis C and a handful of individuals may suffer from liver cirrhosis over the years. Cirrhosis in turn may cause complications like jaundice, infections, bleeding, fluid accumulation in abdomen or even liver cancer. A number of reasons are cited for HCV infections counting sharing a needle, sexual intercourse with an infected individual, child born to mother having HCV, unsterilized tattoo or piercing equipments, sharing personal things like toothbrush and razor with an infected person or even exposure to blood infected with the virus.

The pill Victrelis is recommended thrice a day with meals and is part of a class of drugs known as protease inhibitors. Some side effects however noted in the case of this drug are fatigue, headache, nausea, anemia, and taste distortion (dysgeusia). This was observed when it was administered in combination with pegylated interferon and ribavirin.