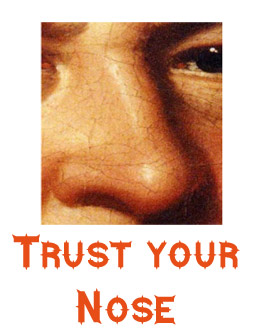 A new research has showed that human noses have evolved to sniff out the smell of real danger! They found that emotion plays a huge part when it comes to differentiating between similar smells.

Scientists found that volunteers who were previously unable to differentiate between two similar scents, learnt to tell them apart when given electric shocks alongside just one of them.

They said that this showed exactly how experiences help sharpen our senses to help us steer clear of danger. The study shows that a single negative experience linked to an odour rapidly teaches us to identify that odour and discriminate it from similar ones.

Further, the researchers suggested that people who had a lesser ability to distinguish between important and irrelevant signals may be more likely to suffer from illnesses characterized by anxiety and vigilance.

“It’s evolutionary. This helps use to have a very sensitive ability to detect something that is important to our survival from an ocean environmental information. It warns us that it’s dangerous and we have to pay attention to it,” said lead study author Dr.Wen Li of the Feinberg School of Medicine Northwestern University, Chicago.

He also added that the ability to discriminate between biologically meaningful cues such as the small of a 175kg lion and similar but irrelevant stimuli such as the smell of a 3kg cat maximizes an organism’s response sensitivity while minimizing hyper vigilant and impulsive behaviors.