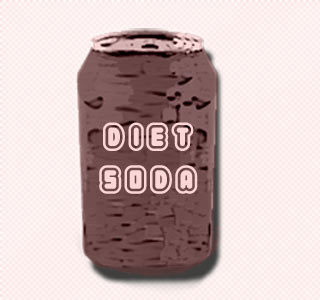 It is well known that the consumption of aerated drinks may have certain negative effects on the health of an individual in the long run. Inspite of being aware of this fact, many people may turn a deaf ear to these claims and continue the intake of such beverages. Even if people don’t want to cut down on the consumption of such drinks, choosing to drink a diet soda may prove to be a relatively healthier option. This may not only be helpful in cutting down one’s calorie intake, but it may also prove to be helpful against the development of kidney stones.

Your doctor may hardly advise or even admit that the consumption of diet soda may be helpful to a person suffering from kidney stones. A team of experts have now stated that a certain ingredient used in sodas may be helpful in curbing the growth of calcium stones in an individual. This fascinating revelation was made by the investigators from the University of California, San Francisco.

Kidney stones are said to be solid crystal aggregations of dissolved minerals in urine. These stones may vary in their size. They could be as small as a grain of sand or as large as a golf ball. These stones usually flush out of the body through urine. This disease may be characterized by symptoms like abdominal distension, nausea, pyuria (pus in the urine), dysuria (burning on urination while passing stone), fever, etc. among others.

For the purpose of the study, the investigators were said to have gauged the alkali content, i.e., malate and citrate, of about 15 popular brands of diet sodas. Through this analysis, the investigators seemingly discovered a few factors about the assessed diet sodas. They were said to have discovered that Diet Sunkist Orange seemingly contained the highest level of total alkali; while Diet 7-Up was stated to contain the highest amount of citrate as alkali.

The study investigators have explained that high alkalinity could lead to the formation of citraturia, which is believed to further lead to calcium stones. It was noted that citrate and malate used in normally consumed diet sodas may be enough to restrain the growth of calcium stones. However, having said this they have also warned people about the regular consumption of sodas.

A spokesperson from the American Urological Association, Anthony Y. Smith, MD, says that, “This study by no means suggests that patients with recurrent kidney stones should trade in their water bottles for soda cans. However, this study suggests instead that patients with stone disease who do not drink soda may benefit from moderate consumption.”

It was even stated that certain regular sodas may also contain the same amount of alkali found in these diet sodas. However, diet sodas were assessed in the study since they contain a lesser amount of calorie as compared to the regular sodas.

This study has been presented at the 104th Annual Scientific Meeting of the American Urological Association.