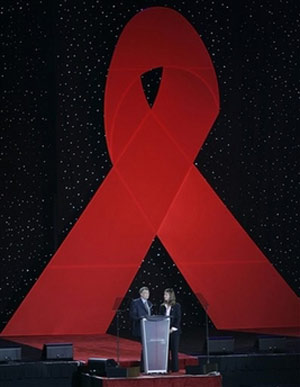 Bill and Melinda Gates, whose foundation has contributed $1.9 billion to fight AIDS, said that the search for HIV prevention drugs that would empower women could just be the next big breakthrough in combating the dreadful disease. The couple joined more than 24,000 scientists, activists, celebrities, HIV-positive people and humanitarians from over 132 countries for a conference on how to combat AIDS, which has killed more than 25 million people the world over.

Gates, who recently announced he would step down from his day-to-day duties at Microsoft Corp. and devote more time to philanthropy, said the search for a vaccine to prevent the virus that causes AIDS was now the foundation’s top priority.

“At the same time, we have to understand that the goal of universal treatment — or even the more modest goal of significantly increasing the percentage of people who get treatment — cannot happen unless we dramatically reduce the rate of new infections,” he said.

Bill Gates said at the opening ceremony of the 16th International AIDS Conference, “We want to call on everyone here and around the world to help speed up what we hope will be the next big breakthrough in the fight against AIDS — the discovery of a microbicide or an oral prevention drug that can block the transmission of HIV,”

“This could mark a turning point in the epidemic, and we have to make it an urgent priority,” he added.

Melinda Gates said the couple visited an AIDS hospice in southern India last December and noticed the wards were divided by gender; the male ward filled with families and flowers.

“Across a courtyard, we saw a very different scene,” she said. “The female ward was a lonely, desolate place. There were no visitors, just women wasting away from AIDS. There was no love, no warmth, no comfort. Just wives, daughters and mothers, left alone to die.”

This year marks the 25th anniversary of the first reported cases of human immunodeficiency virus, or HIV. Since the beginning of the pandemic, nearly 65 million people have been infected with HIV and AIDS has killed more than 25 million people.

Tea and Coffee consumption: A cup too many is best avoided