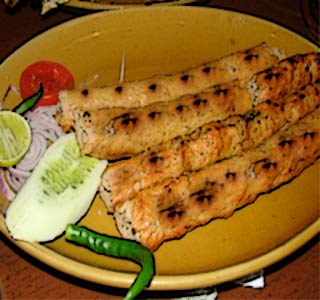 Seasonal month of summer may bring with itself an array of things. With the change in wardrobe, summer season may also to a certain extent bring about changes in dietary preferences as well. Summer season also brings with itself meat favorites like grilled, fried, barbecued or broiled.

Apart from being kind to your taste buds these mouth-watering foodstuffs may also expose one to cancer-causing agents called carcinogens. However a method of lowering the risk associated with this exposure was said to be the mere addition of rosemary extracts or Thai spices to the foodstuffs. This revelation was made by J. Scott Smith, food chemistry professor, Kansas State University, who researched this issue for the Food Safety Consortium.

It was found that the exposure to carcinogenic compounds called heterocyclic amines (HCAs) may be reduced by the mere addition of these spices. It was informed that the amount of antioxidants present in each of these spices was the key factor; and evidently rosemary was said to consist of a greater degree of such antioxidants than Thai spices. Seemingly some rosemary extracts were believed to have the ability to prevent the accumulation of HCAs by almost 40 percent in cooked beef patties.

Smith explains that, “What it boils down to in a lot of the cases is preference as far as the flavor. For example, cinnamon is also very good but some people don’t like it. Some people don’t like rosemary. Some of these Thai spices are unique and there would be ones in colors that people would want to use more than a rosemary or cinnamon or other products.”

The hindrance of HCAs in cooked meat products was stated to be a very crucial issue as far as food safety was concerned. Seemingly it was even noted that an increase in the level of HCA may take place as the charring increases on the meat skin which also reduces the moisture content of the meat.

“We’re trying to evaluate these levels based on the way the consumer would eat the product. We just looked at different products that consumers are consuming. We really didn’t have good data on it, so we took a look at it to see what the actual risk would be,” says Smith.

It was believed that the food industry could possibly promote the consumption of these helpful spices against lowering the risks associated with HCAs in cooked meat products. This may in turn create awareness in the general population.