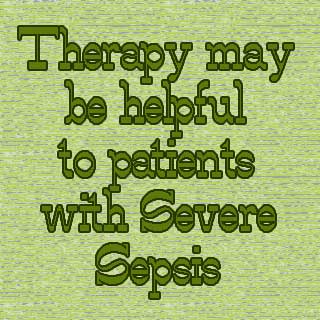 According to a novel study treating severe sepsis or septic shock with a treatment including antibiotic-based “hemoperfusion” device in addition to conventional treatment may lower the patient’s risk of succumbing to the disease. It was found that in addition to decreasing their death risk, this method may also reduce organ dysfunction and even improve their blood circulation. This intriguing study was conducted by Dinna N. Cruz, MD, MPH, of St. Bortolo Hospital and the International Renal Research Institute Vicenza, Italy, and colleagues.

These experts were stated to have revealed that conventional treatment of severe sepsis or septic shock, along with the use of antibiotic-based hemoperfusion device to eliminate the toxic products of bacteria from the blood seemed to benefit patients in numerous ways.

It was noted that severe sepsis and septic shock may be a commonly faced complication in the ICU. These factors were believed to be often accompanied with a greater risk of facing death. The study investigators further go on to state that endotoxin is believed to play a key role in the form of bacteria, with high levels of endotoxin activity been linked with terrible clinical outcomes. Seemingly, septic shock of intra-abdominal origin is believed to usually be linked with high levels of endotoxin. Therefore the experts evidently presume that endotoxin-targeted treatments may prove to be helpful in such a situation.

Polymyxin B fiber column is stated to be a medical device which has seemingly been designed to lower the level of blood endotoxin in sepsis patients. Thereby it is presumed that lowering the circulating level of endotoxin with the help of polymyxin B hemoperfusion may probably improve the patient’s chance of survival.

For the purpose of evaluating this factor, the study investigators were stated to have assessed whether the addition of polymyxin B hemoperfusion to conventional therapy may aid in improving patient outcome. This outcome which was gained through this particular therapy was believed to have been compared with the outcome achieved through the use of conventional therapy alone. These therapies were stated to have been tested on the patients suffering from severe sepsis or septic shock, who had evidently undergone an emergency surgery for intra-abdominal infection.

The study experts noted that, “In this RCT of surgical patients with septic shock and severe sepsis induced by abdominal sepsis, polymyxin B hemoperfusion therapy was effective in improving 28-day [mortality was 32 percent (11/34) in the polymyxin B group vs. 53 percent (16/30) in the conventional therapy group] and hospital survival, blood pressure, vasopressor [an agent that increases blood pressure] requirement, and degree of organ failure …when added to conventional medical treatment.”

However it was even stated that further analysis may be required to look for more innovative techniques which may be used for endotoxin activity for selection of the patient and also monitoring of the hemoperfusion sessions.

This study was presented in the journal JAMA.