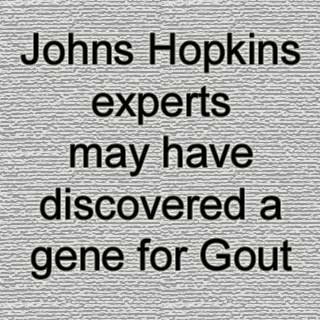 Johns Hopkins study experts supposedly seem to have exposed the malfunctioning gene which appears to cause high concentrations of blood urate. Inefficiency in removing urate from the blood apparently increases the concentration and crystallization. It is believed that blood urate seems to form crystals in joint tissue leading to painful inflammation.

It was noted that the study seems to have been initiated 20 years back. The blood collected from the participants was believed to have been examined for a variety of chemical elements, including uric acid. The participants evidently even reported whether they had ever been diagnosed with gout or not. It is believed that these details may help the experts’ link information from DNA, uric acid levels and gout. A noted distinctive feature of gout disease was stated to be inflammation and pain.

An international team of experts were believed to have analyzed the genomes of about 12,000 individuals in order to discover a genetic cause for gout. More so Johns Hopkins scientists were also stated to have been a part of this evaluation, which was conducted about a year back.

Apparently, the study experts have found a gene called ABCG2, which is believed to create a protein that normally seems to transport urate out of the kidney and into urine. The ABCG2 protein also appears to be located in the kidney at a site where urate excretion takes place.

Michael Kottgen, a bio-chemistry study associate in the Johns Hopkins University School of Medicine has stated that, “As the first major gene identified to cause gout, we believe that ABCG2 also represents an attractive new drug target.”

For the purpose of the study, these experts have apparently used frog egg cells which were genetically engineered with human DNA to establish the role of the ABCG2 gene as a cause of gout. Evidently, excess of rich food and alcohol appears be responsible for the development of gout. Approximately 3 million Americans seems to be suffering from this painful type of arthritis. Also, the experts seem to believe that the ABCG2 gene may be accountable for about 10 percent of gout in Caucasians.

The experts have assumingly unveiled the cells with the mutant ABCG2 protein which seems to excrete uric acid at a lesser rate. “We were able to show for what we believe is the first time that the ABCG2 protein is vital for transporting urate out of cells,” says Owen Woodward, a postdoctoral member in physiology in the Johns Hopkins University School of Medicine.

“It’s exciting that a finding from genome-wide association studies has been directly translated into better understanding physiology and perhaps will help us find better clinical therapies”, confirmed Anna Kottgen, an epidemiologist in the Johns Hopkins University Bloomberg School of Public Health.

These experts have stated that one strategy which might aid in identifying a drug may make the excretion faster and more efficient by activating the “urate transporter” protein.

This study has been published online in Early Edition PNAS.