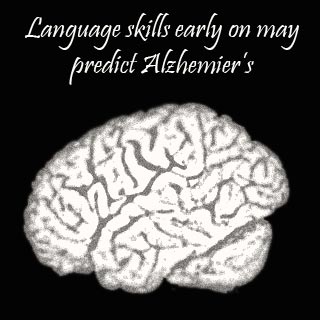 If you are a teenager with superior language skills, then this article may really interest you. A new study shows that people who have higher language skills early in life may have less possiblity to develop Alzheimer’s disease years later. This researchers claim could be inspite of having the hallmark signs of the disease.

For the purpose of the research, experts examined the brains of 38 Catholic nuns after death. The members were part of the Nun Study, a long-term clinical study of Catholic sisters of the School Sisters of Notre Dame congregation living in the United States. Scientists established two groups. The first group comprised of women with memory problems and Alzheimer’s disease seen in the brain whereas the second group included women with normal memory with or without signs of Alzheimer’s in the brain.

Researchers were believed to have examined the essays of 14 participants. These essays seemed to be written by the participants when they entered the convent when they were in their late teens or early 20’s. Researchers then studied the average number of ideas expressed for every 10 words. In addition, their study measured how complex the grammar was in every essay.

Troncoso further stated that, “Despite the small number of participants in this portion of the study, the finding is a fascinating one. Our results show that an intellectual ability test in the early 20s may predict the likelihood of remaining cognitively normal five or six decades later, even in the presence of a large amount of Alzheimer’s disease pathology,”

The study also assessed how growth in brain cells may be connected to the cell’s early response to Alzheimer’s. Besides, how these cells may prevent memory impairment despite a large amount of Alzheimer’s disease lesions was also measured.

The findings of the study revealed that language scores were 20 percent higher in women without memory problems in contrast to those with memory problems. However, the grammar score did not show any variation among the two groups. Researchers, in addition found that nuns who had normal thinking skills and traits of Alzheimer’s showed a significant increase in the size of their brain cells in contrast to people with memory problems and those with normal thinking skills and without the signs of Alzheimer’s.

“Perhaps mental abilities at age 20 are indicative of a brain that will be better able to cope with diseases later in life,” states Troncoso.

This study has been published in the online issue of Neurology, the medical journal of the American Academy of Neurology.