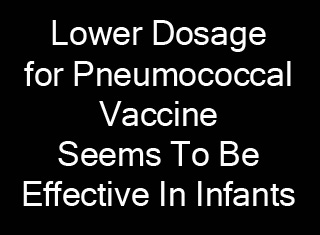 A reduced dose of pneumococcal conjugate vaccine seems to lower the risk of acquiring pneumonia and various other infections. It is stated that the infants given 2-3 primary doses of the 7-valent pneumococcal conjugate vaccine (PCV-7) appeared to have lower risk of developing certain infections, than the one’s who had not been vaccinated. This study was conducted by Elske J.M. van Gils, MD, of the University Medical Center Utrecht, the Netherlands, and colleagues.

For this purpose, the study investigators attempted to evaluate the effects of a 2-dose and 2 + 1-dose PCV schedule on nasopharyngeal (nasal part of the pharynx) pneumococcal carriage in infants. This analysis was conducted on a little more than 1,000 healthy newly born infants. These newborns were then believed to have been randomly categorized to either receive 2 PCV-7 doses at age 2 and 4 months; 2 + 1 PCV-7 doses at age 2, 4 and 11 months; or no dosage at all.

The investigators were notably prompted to conduct this study due to the crowded infant vaccine schedules and less favorable cost-effectiveness calculations.

These findings have been published in JAMA.