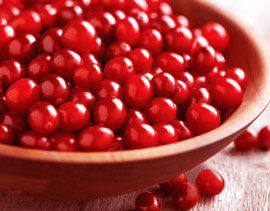 A U.S. research has indicated that certain compounds in cranberries may help to improve the effectiveness of platinum drugs used in chemotherapy to fight ovarian cancer.

Cell culture studies conducted at Rutgers University have demonstrated that human ovarian cancer cells resistant to platinum drugs became up to six times more sensitized to the drugs after exposure to the cranberry compounds, compared to cells that were not exposed to the compounds.

The findings although preliminary, may help reduce harmful side effects associated with using high doses of platinum drugs for treatment of ovarian cancer.

“For the first time, we have shown in our in-vitro studies that cranberry extracts can sensitize resistant human ovarian cancer cell lines,” study co-authors Ajay P. Singh and Nicholi Vorsa, natural products chemists at Rutgers University, said in a statement.

However, they caution the study is experimental and patients with ovarian cancer should always consult their physicians before trying any type of anti-cancer therapy.

The findings were presented at the national meeting of the American Chemical Society in Boston.