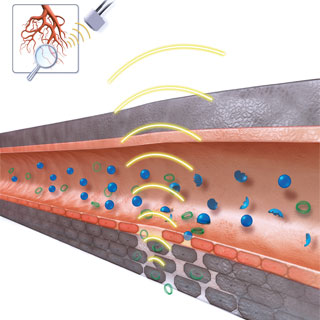 Two companies namely the Royal Philips Electronics along with GlyGenix Therapeutics seemed to have declared a combined research contract in order to discover the possibility of using ultrasound technologies for gene therapy. Supposedly, the collaboration will primarily research the treatment of Glycogen Storage Disease Type 1a (GSD-1a) in pre-clinical studies.

The collaboration seems to combine Philips’ ability in medical imaging technologies with GlyGenix’s expertise in correcting the genetic defect in GSD-1a. The medical imaging technologies may provide diagnosis and minimally-invasive medical procedures. GSD-1a is believed to be a hereditary disease which makes it impossible for the body to regulate glucose levels. Apparently, this occurs due to a defective G6Pase gene which prevents the body from producing an enzyme called glucose-6-phosphatase.

William Fodor, CSO of GlyGenix Therapeutics, Inc commented, “The potential to deliver genes using a targeted approach will be a significant advance for correcting genetic defects and could offer the prospect of curing hereditary diseases such as GSD-1a. Philips’ ultrasound-mediated DNA delivery techniques offer the opportunity to deliver genes without the size constraints and limitations of viral packaging systems, and thus open the door to the development of more robust and effective therapeutic genes.”

It was noted that at present, there are no standard curative treatments for GSD-1a. However, correcting the genetic defect which causes the disease could put forward the hope of an effective therapy. Evidently, this effective therapy would allow patients with GSD-1a to lead an ordinary life. Allegedly, current gene therapies which rely exclusively on the bloodstream in order to carry corrective gene molecules usually fail to deliver adequate quantities to the target organs.

However, it appears that by directing focused ultrasound to target organs following DNA delivery, an increase in uptake via a process called as sonoporation seems to have been successfully established in pre-clinical studies. Sonoporation seems to increase the permeability of cell walls in order to allow the uptake of large molecules, thereby facilitating the delivery of therapeutic genes.

Apparently, the anticipated treatment is known as ultrasound-mediated plasmid DNA (pDNA) delivery. This ultrasound-mediated technique is believed to carry no risk of an anti-viral immune or inflammatory response in contrast to the existing gene therapies which utilizes viral vectors in order to infect cells. Also, this targeted approach could decrease side effects.

The research program inside it may perhaps specifically target the expression of a functional human G6Pase therapeutic pDNA to the liver. Liver was observed to be the primary organ responsible for glycogen storage and glucose release.

GSD-1a is a rare disease that is estimated to affect nearly 1 in every 100,000 to 200,000 births in the USA. However it seems to lead to a considerable reduction in patients’ quality of life and could result in potentially life-threatening co-morbidities in early adulthood.