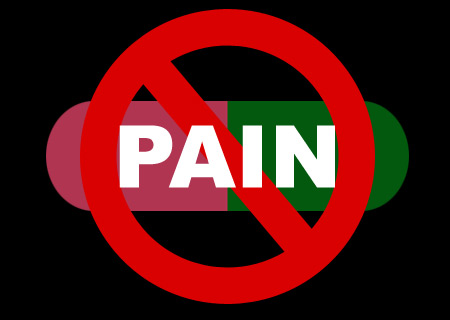 No discussion of indiscriminate drug usage can be complete without a mention of pain medication dependence. Popping pills for minor aches and pains is so commonplace that it does not ring a bell when we think ‘major health issue’. But consider this pain is the leading cause of clinic visits, it is more often than not a symptom of various conditions and more than 5% of patients prescribed painkillers may develop dependence. Just think of the various brands of painkillers that are coming to your mind right now. More than medicines, these products have become enablers. Pain medication helps people overcome debilitating conditions and live normal lives. But central to the abuse of these medicines is a distorted perception of pain and the ‘relief’ provided by medication. We must first understand what pain is and its significance.

Somatic Pain: It is the type which emanates from tissues such as muscles, bones, tendons, ligaments and skin. Pain may be caused due to injury, heat, cold, stretching, inflammation etc. This kind of pain can be located well and can be reproduced by touching, i.e it is localized.

Visceral Pain: Emanates from internal organs and pain may be caused due inflammation, oxygen starvation etc. It is often referred to other areas, commonly the back and is therefore, hard to locate. Referred pain is the kind perceived at a site other than the original site of injury. Eg: Pain in the left shoulder at the time of a heart attack. No definitive theories have been developed yet to explain this phenomenon.

Pain related to nerves can also be of two types:

Neuropathic Pain: This is the pain emanating from nerves and it may be caused due to injury, inflammation, pressure on nerve, degenerative conditions such as multiple sclerosis and infections. The chemical pathway that makes pain perceptible in other organs does not exist in the nervous system. When a nerve is damaged or otherwise disturbed, it starts firing off random signals. These may be interpreted by the brain as pain in different areas of the body, usually where the nerve supplies. This pain may manifest as tingling, sudden jolts, numbness etc., is poorly localized and may migrate. So, it is difficult for the patient to communicate his/her discomfort to the doctor and hence could be difficult to diagnose.

Sympathetic Pain: Originating from the Central Nervous System (CNS), it usually follows a major injury. The affected area remains inflamed and gradually muscle wasting occurs as the patient makes very little use of that area.

Pain as a Symptom

Pain is indicative of a majority of diseases and conditions. It is therefore an evolutionary mechanism that tells us when we are in trouble. Somatic pain is perceived by the brain via a chemical pathway. This pathway is initiated by chemicals released by damaged cells. When chemical levels pass a threshold in the brain, pain is felt. This is threshold is different for different people but it is normally enough for a person to feel discomfort as a warning. What pain medications such as NSAIDs do is disrupt this pathway so that the source or reason for pain persists but it is simply felt less. While this helps comfort a patient, it does not actually cure the underlying problem.

Pain often becomes such an overriding feature of a condition that the patient views the pain as the condition itself. As our lifestyles get more and more comfortable, aversion to the slightest pain increases. Lack of physical exercise means weaker backs, joints and muscles to carry an ever-increasing body mass around. In addition, the abundance and ease with which pain medications are available over the counter makes popping pills the norm.

The definitions of these two terms have undergone numerous changes and updates over the years. Theoretically, the terms should not be used interchangeably. For the sake of this discussion, let us consider a working definition.

Dependence could be a compulsive physiological craving for a drug. The more the exposure to a drug, the higher are the chances of the body getting used to it. Exposure is a factor of duration of treatment, dosage and frequency of administration. As mentioned earlier, drugs such as analgesics change chemical levels to achieve the targeted effect. As exposure increases, the body learns to live with these changes. By taking a drug repeatedly, we are in effect, training our physiology to function with this new chemical environment. Overtime, the body recognizes these altered chemical levels as normal. When the blood level of the drug goes down, craving for the drug sets in.

Typical dependence goes through gradual stages. Preoccupation with the drug and seeking it actively, binging on the drug/increasing intake and withdrawal as typically seen with alcohol addicts. The probability and severity of dependence depends on the type of drug, amount of exposure and individual predisposition. An individual’s predisposition towards dependence stems from genetic, environmental and sociological factors.

The drugs most commonly associated with dependence are anti-depressants and other neuro-psychiatry drugs. These may be prescribed in cases of neuropathic pain. The fact that the patient is already in a depressed emotional state and the long duration of the therapy also increase chances of habit forming. However, what is increasingly being observed is abuse of OTC pain medications. We have seen cases amongst friends and family where the concerned person cannot get through a day with popping a paracetamol or even a combination tablet. Reasons cited for this consumption are vague and varied from ‘It gives me energy to work’ to ‘I don’t feel hungry if I don’t take my morning dose of ___’. And all this is apart from the usual aches like head, stomach, back and more.

Abuse of any medication puts undue stress on the kidneys. This gets more complicated with old age and diabetes. As one gets used to popping pills to deal with pain, sensitivity to pain naturally goes down. Thus, mild fleeting headaches that would otherwise go almost unnoticed now need a pill. A related phenomenon is tolerance i.e. more and more concentration of the drug is required to achieve the same effect as the body gets used to it. If this is not discouragement enough, long term use of painkillers has also been linked to blindness.

One need not suffer through the pain, but spending a few hours with a mild headache or back pain doesn’t kill anybody. Be vigilant about family and friends and your own disposition towards taking OTC drugs. Not only can this lead to abuse but it can also let a serious condition go un-noticed. Different analgesics are indicated for different kinds of pain such as migraines, neuralgias, arthritic pain etc. The best option is to always consult a doctor if pain and/or discomfort keep you from performing your regular activities.

In cases of neurological pain, commonly used painkillers cannot provide much relief. This is because the pain receptors that these drugs target are simply not involved in neuropathic conditions. Also, these conditions are difficult for the patient to describe as both the nature and location of the pain can keep changing. Self-medication in such cases would not only lead to fruitless consumption of drugs but also lead to a deterioration of the underlying condition in the absence of appropriate treatment. Vague pain in the stomach area can be due to a stomach infection, an enlarged appendix or simply indigestion. Unnoticed cases of appendicitis ending up in death due to bursting of the appendix are still commonly reported.

So next time a popular ad jingle rings in your head along with a headache, try whistling through it.