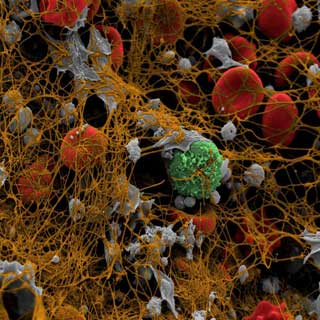 Fibrin is known to be the main ingredient of blood clots and is claimed to be an amazingly versatile polymer. It not only forms a network of fibers but also provides a platform for thrombi. Supposedly, a network of fibers is a blood clot which stops the loss of blood at an injury site while remaining pliable and flexible.

Fibrin, on the other hand appears to offer a scaffold for thrombi, clot that block blood vessels and cause tissue damage. This damage may lead to myocardial infarction, ischemic stroke, and other heart diseases. Until now, it was unknown as to how fibrin manages to be so strong and yet so extensible under the pressures of healing and blood flow.

However, researchers from the University of Pennsylvania School of Medicine, the School of Arts and Sciences, and the School of Engineering and Applied Science have discovered a process identified as protein unfolding. An interdisciplinary team of investigators have revealed how protein unfolding seems to allow fibrin in order to maintain its remarkable and opposing characteristics.

It was believed that understanding blood clot mechanics could possibly assist in the design of novel treatments. Apparently, these treatments would not only prevent or remove clots which cause heart attacks and strokes but also enhance blood clotting in people undergoing bleeding disorders. In addition, fibrin’s remarkable characteristics may lead to applications in designing novel synthetic materials based on its biology.

Senior author John Weisel, PhD, Professor of Cell and Developmental Biology along with his colleagues took help of previous work which stated the properties of fibrin and then examined the procedure of fibrin clots under stress from the macroscopic scale down to the molecular level.

The team of researchers used a variety of techniques. These techniques ranged from simple controlled stretching to electron microscopy, X-ray diffraction, atomic force microscopy and mathematical modeling. This mathematical modeling, allegedly, provides a logical picture of how fibrin clots behave from the centimeter to the nanometer scale. This multi-scale strategy seems to be very essential.

“You have to examine events at different spatial scales with various methodologies to understand how fibrin behaves,” explains Weisel.

They found that individual fibers in a fibrin blood clot usually appear to be oriented at random in an intricate meshwork pattern. However, it was noted that when the clot is extended, the fibers begin to align with each other in the direction of stress. Also, while the strain continues, the clot seems to stretch and gets longer. However the clots volume in fact appears to decrease, this surprised the researchers.

“That’s very unusual. It’s a property that’s been found in a few other materials but it’s very rare,” says Weisel. This was a certain sign that something unexpected seems to be going on.

Prashant K. Purohit, an assistant Professor of Mechanical Engineering stated that, “Slipping past each other between or within fibers was not a possibility that could give rise to such high unusual extensions because these fibers were cross-linked. This research provides evidence, both in terms of the mathematical model and with x-ray scattering data, that there is indeed unfolding going on.”

Protein unfolding was observed to have elucidated how the volume of the fibers decreases as they’re stretched.

Weisel further explained that, “When you unfold proteins, you’re exposing parts that are normally buried in the middle of the molecule. And these are hydrophobic; they don’t want to be near water. So the unfolded protein structures interact with each other through those hydrophobic parts and water is expelled from the molecule. We see this when we stretch the fibrin and that’s how the whole clot volume decreases about tenfold with threefold stretching.”

Evidently, this huge extensibility of fibrin on the molecular scale allows a fibrin clot to undergo the stretching and pulling which occurs at the time of wound healing, while remaining permeable enough to allow itself to be broken down by enzymes when it’s no more required. However, this expulsion of water was known to be a surprise.

Weisel added that, “The volume change, the fact that it’s so extensible, that wasn’t known previously. At the molecular level this unfolding is necessary for the mechanical properties.”

Weisel concluded by saying that, “The more we know about the mechanism of blood clotting, the greater the possibilities for learning how to control and modulate it, which may lead to new treatments of thrombotic and bleeding problems.”

This research work seems to have opened up new possibilities of research which the researchers appear to be keen in practicing. Besides the apparent medical benefits, this research seems to emphasize the relevance of the research to other fields, such as biomedical engineering and materials science.