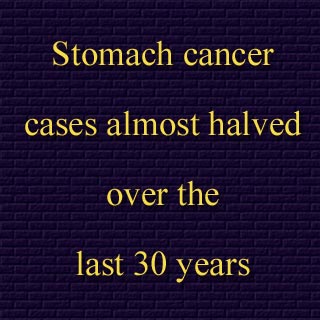 A novel Cancer Research in UK revealed that stomach cancer cases in Great Britain seemed to have fallen down by about half from around 14,000 in 1975 to 7,485 in the year 2006.

However, recently, the number of cases seemed to have dropped as lifestyles have become healthier. Supposedly, diet, infection and smoking are the three chief risk factors for stomach cancer.

A widespread stomach bacterium called Helicobacter pylori (H. pylori) is known to be the main cause of stomach cancer. Apparently, improved living conditions with less overcrowding has led to a decrease in H. pylori infection. The decrease in infection is considered to be a major reason for the decline in the cases of stomach cancer.

For the foremost time, researchers seemed to have revealed the connection between H. pylori and stomach cancer. This link was seen in studies performed in rural China in the year 1990 and in adult men in England and Wales in 1991.

Also, refrigeration appears to have a chief impact on reducing the cases of stomach cancer. This is happening due to storage of food in the fridge which keeps it cool thereby maintaining the freshness of food for a longer period of time. Further, fewer additives appear to be required in order to preserve food.

“It’s important that people know how to reduce their risk of the disease. Fruit and vegetables have a protective effect against stomach cancer and people with diets high in salt have an increased risk. A healthy diet high in fruit, veg and fibre, low in red and processed meat and salt helps reduce the risk of not just stomach cancer but many different cancers,” elucidates Walker.

Stomach cancer is known to be the seventh most common cause of cancer death. Evidently, more than 5200 people die every year from this disease. It was observed that a poor diet low in fruit and vegetables and high in salt raises the chances of stomach cancer similar to a family history of the disease.