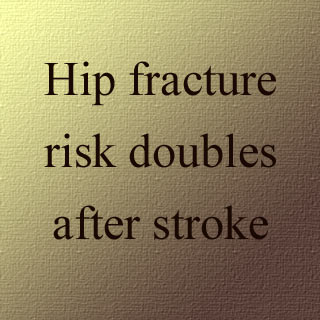 Experts recently discovered that stroke survivors have nearly twice the possibility of breaking a hip or femur in contrast to those without stroke. Also, the risk seems to be even higher for younger patients, women and those who have experienced a stroke recently.

Experts associated with the study examined nearly 6,763 patients who seemed to have a hip or femur fracture. Experts further matched the patients through their age, gender and location with 26,341 others in a huge database of Dutch patients without fractures. Allegedly, the average age of study participants was 75 and approximately 73 percent were female.

Once they completed adjusting the common factors for fracture risk, experts found that in general, stroke appears to have been associated with nearly twice the risk of fracture. Supposedly, amongst women, fracture risk was to some extent higher than double.

“Our findings imply that it is important to conduct fracture risk assessment immediately after a patient is hospitalized for stroke,” stated Senior author of the study and assistant professor of pharmacoepidemiology at the Utrecht University in Utrecht, the Netherlands, Frank de Vries.

In addition, patients were very susceptible for hip or femur fracture during the initial three months after a stroke, when the risk appears to be more than three times higher in contrast to others. It was noted that the youngest stroke survivors who were of the age 70 years or less were at an increased risk.

“Hip or femur fracture after stroke declined with increasing age. It’s likely, therefore, that the overall contribution of stroke to hip fracture risk declines with age,” elucidates Frank. “Fall prevention programs, bone mineral density measurements and medicines to strengthen bones may be necessary to minimize hip fractures in the elderly both during and after stroke rehabilitation. Management strategies should include further evaluation of other risk factors for fracture.”

The study findings further revealed that patients who had a hemorrhagic stroke seemed to be at a slightly higher risk of hip or femur fracture in contrast to those who had an ischemic stroke. Ischemic stroke is known to be caused by artery blockage. However, experts were of the opinion that the difference didn’t reach statistical significance.

Also, the majority of hip or femur fractures were noted to occur in people aged 50 or older. It was estimated that the standard period between stroke and fracture was nearly 2.2 years.

Experts claimed that the findings of highest risk of fracture in the initial months after stroke confirmed and emphasized other trials showed ‘substantially higher’ rates of bone mineral density loss within the initial six months after stroke. Apparently, loss of bone mineral density was most noticeable in paralyzed extremities as a result of decreased mobility.

“According to the National Osteoporosis Foundation, almost 300,000 persons sustain a hip fracture in the United States each year. Roughly 60,000 of these patients, or 20 percent, die within a year of their fracture,” says Frank.

The study authors stated that the limitations of this study was the inclusion of patients in spite of whether their stroke resulted in hemiplegia. Hemiplegia is known to be a disease condition in which one side of the body is paralyzed. Previous research seemed to have found a ‘significant increase’ in relative risk of fracture in hemiplegic stroke patients.

Furthermore, experts were unable to assess whether the risk of mortality after hip fracture appears to be different between patients with and without stroke. Since the study was ‘observational,’ they couldn’t adjust for possible difficult factors such as body mass index and smoking.

The findings of the study have been published in the journal of the American Heart Association known as Stroke.