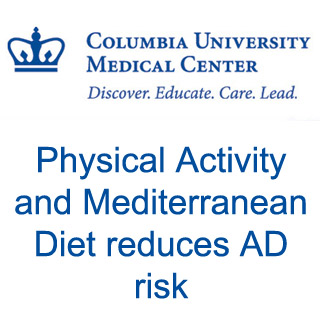 For quite some time now, we have heard about a Mediterranean diet claiming to be healthy thanks to its nutritional value. Recent studies have indicated that the diet apparently has the potential to lower the risk of diabetes, keep of asthma and allergies and also maintain a healthy heart. A new study now takes this forward by revealing that individuals who are more physically active and follow a Mediterranean-type diet seem to lower their risks of Alzheimer’s.

The findings of this observational study give a go-ahead to further analysis in controlled clinical trial with respect to Alzheimer’s. Experts can then detail out the role of these and other possible factors that contribute to AD risk. Earlier studies appear to have limited their investigations to only the association between either physical activity or diet and Alzheimer’s disease risk separately. However this new research delves deeper into their combined link to AD.

“Often times people who exercise also follow a healthy diet and vice versa. We wanted to tease out which of these two behaviors may be associated with lower risk for AD, or if the combination of the two is associated with decreased risk even further,” mentioned Nikos Scarmeas, M.D., lead author of the study and associate professor of clinical neurology in the Department of Neurology, in the Sergievsky Center and in the Taub Institute for Research on Alzheimer’s Disease and the Aging Brain at Columbia University Medical Center.

A population-based study, this novel investigation was conducted in a multi-ethnic community living in Northern Manhattan. It analyzed around 1880 elderly subjects with an average age of 77. Queries about their activity during a two week period before the interview offered information about the volunteers’ physical exercise routine. Subjects were also interrogated about their food consumption over the course of the previous year as part of the dietary portion of the study.

After interviewing participants about their level of physical activity and dietary habits, their responses were summarized into two single scores. The responses were grouped into nine food categories and their sum represented the Mediterranean-type diet score. High intake of fish, vegetables, legumes, fruits, cereals and monounsaturated fatty acids; relatively low intake of dairy products, meats and saturated fats; and moderate alcohol consumption are noted to be the general characteristics of a Mediterranean diet.

Next, the study subjects were closely tracked to observe the ones who seemed to have developed Alzheimer’s in a period of approximately five and a half years. Experts discovered that subjects who were strongly physically active had a 33 percent lowered risk of Alzheimer’s and those who strictly followed a Mediterranean-type diet had a 40 percent risk reduction. Besides, study participants who reported to have been both exercising a lot and following a diet closer to the Mediterranean-type supposedly had a 60 percent reduction in their risk for developing Alzheimer’s disease.

“So it seemed that the more that they were doing in terms of both diet and exercise, the lower was their risk for the disease,” added Dr. Scarmeas. “This study is important because it shows that people may be able to alter their risk of developing Alzheimer’s by modifying their lifestyles through diet and exercise.”

“Since the benefits of following a healthy diet and remaining active have already been suggested as beneficial in other disease prevention and since based on the present and other similar studies we have some preliminary hints that this may also be helpful for brain health, it seems advisable that we emphasize not only to patients, but to healthy individuals, too, the importance of these lifestyle behaviors in affecting our overall health,” further elucidates Dr. Scarmeas.

Even low degrees of physical activity by these elderly people seemed to have a protective effect against Alzheimer’s noted Dr. Scarmeas. However, experts associated to the study caution that this was an observational, epidemiological study and was mainly based on interviews with participants regarding their physical activity routines and dietary habits. The associations were hence based on the subjects’ response without any randomized interventions. A clinical trial type of design would be essential to acquire additional information that would aid in understanding the role of these behaviors. It could also help to reveal other potential contributing factors.

The report is published in the Aug issue of the Journal of the American Medical Association (JAMA).