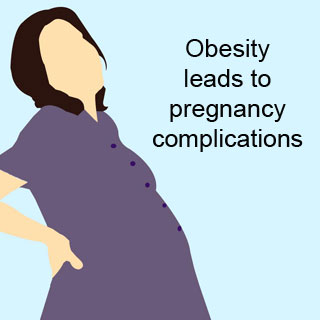 According to a novel study, expectant mothers who are obese seem to be at a higher risk of experiencing minor complications like chest infections, and heart burn during pregnancy. Also, they seem to have double the risks of suffering from headaches in contrast to healthy pregnant women. This study was carried out by the experts from the University of Edinburgh.

It was noted that nearly a quarter of pregnant women giving birth are overweight. Also, more than one-third of pregnancy-related deaths seem to occur in obese mothers. For the purpose of their study, experts evaluated approximately 650 expectant women. Nearly, half of them were noted to have been obese at the start of their pregnancy. The analysis also took into consideration factors such as age and smoking.

Supposedly, overweight pregnant women were three times more prone to undergo carpal tunnel syndrome. This is known to arise when an increase in fluid causes swelling in the wrist. Apparently, this condition could lead to tingling, pain, numbness and lack of coordination in the hands.

They also found that obese women had high increased possibility of undergoing a condition known as symphysis-pubis dysfunction. This condition was believed to affect the pelvic joints and could cause difficulty while walking if it was severe.

Dr Rebecca Reynolds, of the Tommy’s Centre for Maternal and Fetal Health at the University of Edinburgh stated that, “Although symptoms such as heartburn are common and generally perceived to be benign, they can still have a major impact on the quality of life for pregnant women and can be linked to more serious conditions. What may be termed as minor complications can make a pregnancy much more uncomfortable and are also associated with higher treatment costs.”

It was estimated that the costs involved in treating minor complications in obese women were about three times more than treating a healthy women. In addition, obesity at the time of pregnancy seems to increase the risk of more severe conditions like gestational diabetes, pre-eclampsia and the need for a caesarean section.

The Tommy’s Centre for Maternal and Fetal Health at the University of Edinburgh appear to be examining the implications of obesity in pregnancy and how this could be tackled in order to improve the health of mother as well as the child.

The findings of the study have been published in the British Journal of Obstetrics and Gynaecology.