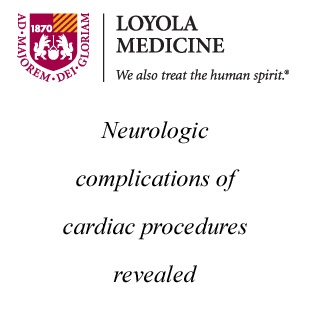 Potential neurological complications of heart surgery which vary from headaches to strokes have now been specified in a novel article. This article was written by Dr. Betsy Love, Dr. Sara Hocker and senior author Dr. Jose Biller of Loyola University Chicago’s Stritch School of Medicine.

According to the American Heart Association, nearly 1.3 million angioplasties and approximately 448,000 bypass surgeries were noted to have been performed in the United States in the year 2006. Also, thousands of other patients seem to have undergone surgeries for other cardiac conditions.

Researchers were believed to have listed the possible medical procedures in the most complete and advanced analysis of its kind. Apparently, these medical procedures included possible nervous system complications of bypass surgeries, aortic surgery, cardiac catheterizations, valve replacements, heart transplants and surgeries for congenital heart disease and heart tumors.

Furthermore, the operating techniques which were utilized as well as other factors appear to have depended on the patient’s age. Studies mentioned in the article estimated that the risk of stroke ranges from simply under 1 percent to as high as 5 percent.

Researchers stated that, “Neurologic complications of cardiac procedures can involve literally any part of the central and peripheral nervous systems.”

Chairman of the neurology department at Loyola’s Stritch School of Medicine, Biller stated that during cardiac surgery, there’s always a threat of neurologic complications, especially in older patients who might be experiencing other health problems.

However, Biller claimed that patients should not be frightened to undergo cardiac procedures. Many complications appear to have been infrequent. He further stated that regardless of the risks, cardiac surgeries usually ‘are highly beneficial and life saving.’

Allegedly, this article is an updated and fully reworked edition of a review article which was published in MedLink Neurology in June, 2008. The original article was believed to have been written by Biller, Love and Dr. James Fleck of Indiana University School of Medicine.