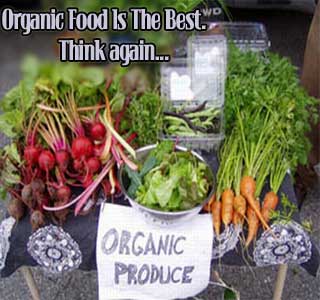 The preference for organic food over food grown normally is increasing by the day. It may dishearten you to know there is no backup for organic food being the best. A novel research supported by the International Centre for Research in Organic Food Systems (ICROFS), Denmark reveals that there is no specific evidence to support the argument that organic food is better than food grown with the use of pesticides and chemicals.

Dr Susanne Bügel and colleagues from the Department of Human Nutrition, University of Copenhagen conducted the one of a kind study. Using three different cultivation methods in two seasons, animals were fed a diet consisting of the crops grown. The study examined staple ingredients like carrots, kale, mature peas, apples and potatoes which are easily found in most families shopping lists. This helped researchers to look at the retention of minerals and trace elements.

Further adding, Dr Alan Baylis, honorary secretary of SCI’s Bioresources Group mentioned, “Modern crop protection chemicals to control weeds, pests and diseases are extensively tested and stringently regulated, and once in the soil, mineral nutrients from natural or artificial fertilizers are chemically identical. Organic crops are often lower yielding and eating them is a lifestyle choice for those who can afford it.”

For the first cultivation method, vegetables were grown on soil low in nutrients. The process used animal manure and no pesticides except for one organically approved product on kale only. The second method, also low in nutrient input consisted of a combination of animal manure and pesticides, as much as allowed by regulation. The third and final method involved applying mineral fertilizers in combination with the legally allowed quantity of pesticides. This technique gave a high input of nutrients to the soil.

All crops experienced the same weather conditions and were grown on similar soil on adjacent fields. Also they were harvested and treated at the same time. For organic vegetables, established organic soil was utilized.

Results after harvest suggested that though the three methods were different, there was no variation in the levels of major and trace contents in the fruits and vegetables grown. Over a two year period, this produce of conventionally and organically grown crops was fed to animals. A measurement of intake and excretion of various minerals and trace elements was taken. In tandem with harvest results, these measurements also found that regardless of how the crops were grown, there was no difference in retention of the elements.

The study thus concluded that not enough proof is available to support the nutritional benefits of organic food over conventional food. Believing that organic food contains more nutritional content than food grown with normal chemicals and pesticides, numerous people all over the world pay more than a third for it.

This research is published in the latest issue of the Society of Chemical Industry’s (SCI) Journal of the Science of Food and Agriculture.