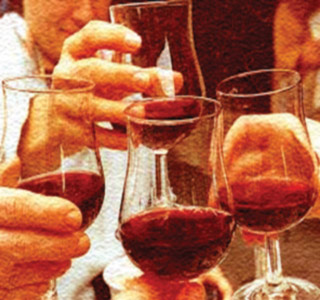 UC San Diego School of Medicine’s researchers have studied wine drinkers who consumed one glass a day. On studying them, the researchers concluded that wine is safe for the liver, and also lowers the pervasiveness of Non-Alcoholic Fatty Liver Disease (NAFLD).

The study will be presented in the June 2008 issue of the journal Hepatology. Through the study it has been found that people, who consumed 1 glass of only wine as compared to alcohol, will suffer half the risk of liver disease due to NAFLD. Contrarily people who consumed beer or liquor were found to have four times the risk of having suspected NAFLD compared to wine drinkers.

United States is found to have over 40 million adults suffering from NAFLD, the most common liver disease. Some of the primary risks for NAFLD are just like some of the cardiovascular diseases, such as obesity, diabetes, high triglycerides, and high blood pressure. But several studies have been showing that modest alcohol consumption might reduce the risk of heart diseases.

People who were modest alcohol consumers were at a risk of cardiovascular disease but it has been unseen whether they are even at the risk for NAFLD or not. Hence there is a predicament whether modest alcohol consumption is safe with regards to the liver. The UC San Diego researchers tried to elaborate this vital question.

“The results of this study present a paradigm shift, suggesting that modest wine consumption may not only be safe for the liver but may actually decrease the prevalence of NAFLD. The odds of having suspected NAFLD based upon abnormal liver blood tests was reduced by 50 percent in individuals who drank one glass of wine a day,” said Jeffrey Schwimmer, M.D., associate professor of gastroenterology, hepatology and nutrition, Department of Pediatrics, UC San Diego School of Medicine and Director, Fatty Liver Clinic at Rady Children’s Hospital San Diego.

The findings of the study remained stable, even after adjusting for age, sex, race, education, income, diet, physical activity, body mass index, and other markers of health status.

“Because this effect was only seen with wine, not in beer or liquor, further studies will be needed to determine whether the benefits seen were due to the alcohol or non-alcohol components of wine,” added Schwimmer.

The National Health and Nutrition Examination Survey (NHANES) examined almost 12,000 participants. From these participants 7,211 were non-drinkers and 4,543 were modest alcohol consumers. The modest alcoholic people had an intake average of one drink per day of four ounces of wine, 12 ounces of beer and one ounce of liquor. NHANES is the only large epidemiological survey which was held by the Centers for Disease Control and Prevention (CDC). The past records of the alcoholics were acquired by a trained interviewer in a closed room so as to preserve the confidential interrogations.