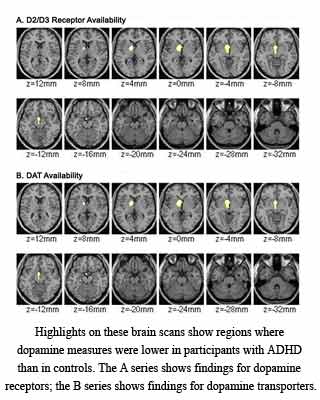 A brain-imaging study conducted at the U.S. Department of Energy’s (DOE) Brookhaven National Laboratory provided the foremost definitive evidence for attention deficit hyperactivity disorder (ADHD). Apparently, experts claimed that patients suffering from ADHD seem to have below normal levels of certain proteins which are crucial for experiencing reward and motivation.

Prior to this study, it was indistinct whether people with ADHD could possibly be having abnormalities in the brain’s dopamine-mediated motivation or reward system. Supposedly, earlier studies were comparatively small and may have been complicated by the fact that some ADHD patients had undergone treatments reveal the experts. Or else, ADHD patients may perhaps be having a history of drug abuse or other conditions which could affect the dopamine system.

“These deficits in the brain’s reward system may help explain clinical symptoms of ADHD, including inattention and reduced motivation, as well as the propensity for complications such as drug abuse and obesity among ADHD patients,” stated lead author Nora Volkow, Director of the National Institute on Drug Abuse and a long-time collaborator on neuroimaging research at Brookhaven Lab.

“Finding ways to address the underlying reward-system deficit could improve the direct clinical outcome of ADHD, and potentially reduce the likelihood of other negative consequences of this condition,” says study co-author Gene-Jack Wang, chair of Brookhaven’s medical department.

In order to support the statistics and control for these factors, the existing study examined nearly 53 adult ADHD patients who had never received treatment as well as approximately 44 healthy control subjects. All these subjects were believed to have been carefully screened in order to eliminate probably confusing variables. The scientists were noted to have made use of positron emission tomography (PET) in order to measure two markers of the dopamine system namely, dopamine receptors and dopamine transporters.

In dopamine receptors, the chemical messenger apparently, binds in order to propagate the ‘reward’ signal, and in dopamine transporters, the chemical messenger seems to take up and recycle excess dopamine after the signal is sent. Lying in a PET scanner, each patient was noted to have been injected with a minute amount of a ‘radiotracer’ compound. This compound is known to be a chemical labeled with a radioactive form of carbon and designed to bind particularly to one of the targets.

Furthermore, different tracers were used for each target, and patients were scanned for each at separate times. By detecting the signal from the radiotracers, the PET machine could be able to measure the receptor and transporter locations and concentrations in various parts of the brain.

The findings revealed that compared to the healthy control subjects, the ADHD patients seem to have lower levels of dopamine receptors and transporters in the two key regions of the brain. These two regions namely the accumbens and midbrain appear to be directly involved in processing motivation and reward.

“Our findings imply that these deficits in the dopamine reward pathway play a role in the symptoms of inattention in ADHD and could underlie these patients’ abnormal responses to reward,” elucidates Volkow.

She further continued, “This pathway plays a key role in reinforcement, motivation, and in learning how to associate various stimuli with rewards. Its involvement in ADHD supports the use of interventions to enhance the appeal and relevance of school and work tasks to improve performance.”

Also, the measurements of dopamine markers could perhaps have connected with measures of behavior and clinical observations of ADHD symptoms, such as reduced levels of attention as measured by standard psychological tests.

“Our results also support the continued use of stimulant medications — the most common pharmacological treatment for ADHD — which have been shown to increase attention to cognitive tasks by elevating brain dopamine,” she said.

Wang further said that, “Other studies from our group suggest that patients who abuse drugs or overeat may be unconsciously attempting to compensate for a deficient reward system by boosting their dopamine levels. Understanding how deficits in the dopamine system contribute to ADHD and finding ways to improve the functioning of the reward system could help mitigate these troubling consequences in the ADHD patient population.”

This study is known to have vital implications for treatment. Additionally, the findings may assist in explaining why ADHD patients seem to be more likely to develop drug-abuse disorders and conditions such as obesity as compared to control subjects.