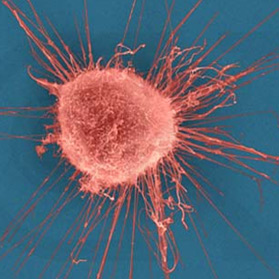 Scientists at the Howard Hughes Medical Institute have recently discovered certain chemicals that claim to stop the spread of cancer, a deadly disease in the human body.

According to the scientists, a protein called E-cadherin causes cells to remain clustered together. This obstructs them from breaking away and spreading throughout the body.

The scientists have now planned for further advancement in this field by generating new drugs that is capable of halting the spread of cancer, which is known as metastasis, in the body.

One of the researchers, Dr Chris Ward said, “Understanding how cancer cells spread is tremendously important for cancer research. It is the ability of tumors to invade other tissues and spread around the body that makes them so risky. The cancer just overwhelms the body.

Potentially, our findings can be applied to the most common form of cancer, carcinoma, found in the breast, lung and gut for example, which makes up 80 to 90 per cent of all cancers.”

Each and every year, a number of people succumb to cancer all over the world. Out of this, figures show that greater ratio of deaths take place due to breast and lung cancers.

To date, though countless research work and experiments have been held by scientists and doctors, the final medical treatment that is capable of curing all kinds of fatal cancer has not been discovered so far.

Norman Barrett of the Association for International Cancer Research, which sponsored the entire study was quoted saying, “Dr Ward and his team are pursuing research which could change the lives of tens of thousands of people in the UK and many more across the world.”

Some researchers were optimistic and looked forward to create newer, effective drugs that is capable of preventing the spread of cancer after the completion of this study.