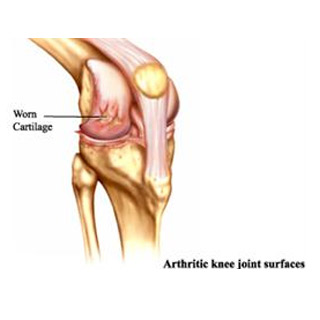 Osteoporosis and osteoarthritis are often confused with, as they both start with ‘osteo’ which means ‘bone’. Both the conditions are apparently common in women over age 60.

Even though osteoporosis and osteoarthritis are two different diseases, a latest study which was presented at the annual meeting of the American Society for Bone and Mineral Research in Denver, claims that a present osteoporosis drug is said to avert cartilage loss from osteoarthritis following injury to a joint. It may also renew some cartilage that has apparently been lost to osteoarthritis.

The study was conducted on mice. The model claims to strongly imitate human osteoarthritis that may develop, following knee injuries. Cartilage may get damaged by several types of injury and by mechanical stresses that apparently come with age. As time passes, damaged cartilage may worsen to cause osteoarthritis (OA), with its supposed attendant combined inflammation and pain. Drugs, which are presently available apparently decrease pain but do not tackle the loss of cartilage behind osteoarthritis. By 2020, it is estimated to afflict more than 50 million Americans.

Cartilage apparently forms a shock-absorbing layer which may keep the force of running, jumping and lifting from crushing bones against each other in joints. Chondrocyte is the cartilage-producing cell which may be accountable for preserving the integrity of joint cartilage. Outside the joints, it may experience a usual maturation process that could aid in bone formation as part of fracture healing and bone growth in children. Disease and injury may cause chondrocytes in joint surface cartilage to become like those that assist to mend bone elsewhere, but in a location where bone is not supposed to form. This misguided maturation may add to the eventual damage of the joint seen in osteoarthritis.

Parathyroid hormone (PTH) is called as teriparatide in drug form. It has apparently surfaced as a chief player in the protection and healing of bone. Previous studies have supposedly clarified that PTH could avert chondrocytes from going through maturation and may fuel their proliferation, by claiming to preserve bigger pools of cartilage cells in the joint. It was observed that chondrocytes inside injured and degenerating cartilage may have more PTH type 1 receptors on their surfaces. This makes them particularly sensitive to the PTH signal that could avert harmful chondrocyte maturation into bone in the joint cartilage. Therefore, PTH therapy apparently ought to raise the cartilage supply just where cartilage loss may be causing disease.

Randy Rosier, M.D., Ph.D., professor within the Department of Orthopaedics and Rehabilitation at the University of Rochester Medical Center, commented, “Right now physicians have no way to bring back cartilage in patients who have lost it to osteoarthritis. Our current results, at least in mice, show that we can inhibit cartilage degeneration and improve the volume of cartilage in diseased joints. It’s remarkable enough that this compound delays the loss of cartilage, but these results show it also may be able to restore, at least to some extent, cartilage in already degraded joint surfaces.”

The impact of a daily dose of Forteo/teriparatide was examined. A five-fold increase in PTH type 1 receptor expression in the articular cartilage of mice with injury-related osteoarthritis may be seen when weighed against the healthy cartilage. This was supposedly established by the experiments. Injury may activate genetic mechanisms in an effort to start repairs. This repair response could be in charge for the raise in PTH receptor in the joint. This in turn may make damaged cartilage predominantly receptive to PTH.

The study included one group of mice with cartilage and ligament injuries. They were to receive either saline as a control, Forteo or generic PTH everyday for around 12 weeks. Treatment was not given to the second group of mice until about 8 weeks post injury. The setback may be an effort to decide the effect of treatment once the osteoarthritic process was happening and some cartilage was lost. Rosier mentioned that patients do not visit their physician post an injury asking the doctor to avert the beginning of osteoarthritis, 10 years later in life. They may visit the doctor when an old injury and time have apparently united to degrade cartilage to the point where function may be lost and pain could be felt.

It was exposed that post 12 weeks of Forteo or generic PTH treatment; there was about 27 percent more joint cartilage as opposed to saline-treated mice. Noticeably, postponed teriparatide treatment was apparently even more effective in bettering the quantity of cartilage, with up to about 35 percent more cartilage in Forteo and PTH-treated groups as compared to the saline group. It apparently suggested a capability to renew at least some of the lost cartilage.

With a fresh use patent application in place, the team may then request to verify the durability of the effect in more animal studies. Arranging to seek funding from the National Institutes of Health, experts hope to start pilot clinical studies of PTH treatment of osteoarthritis in humans, perhaps in the later half of 2010.