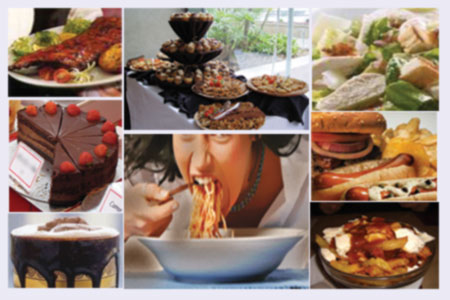 Chocolate cake, ice-creams, pastries, milkshakes, sizzling brownie, pizza, burgers, yummm…….all these food items are so yummy; but when you see them your temptation slice increases to a greater level. Through a recent study by Montreal’s Neurological Institute at McGill University, it has been found that a gut hormone prompts you to eat more and also makes the food look more delicious.

The researchers revealed that there are some reward centers in the brain which respond more strongly to the photographs or images of food. This was found in a brain imaging study of individuals who had received an infusion of the hormone known as ghrelin.

The findings have implied that the two drives which are there for feeding the metabolic signals and pleasure signals are entangled. Alain Dagher, a neurologist at McGill University in Montreal, Canada, who has led the study said, “When volunteers received a dose of a natural hunger-inducing hormone called ghrelin, their brains responded to pictures of food in the same way that addicted people’s brains do to cigarettes or drugs.”

Supermarkets and fast food outlets are coming up in every nook and corner with creative marketing strategies and advertisements to get in more customers and run their business in a better way. This has resulted in people becoming food addicts as the brain sends a signal which makes people eat more and more to try different things available, according to the study. People end up gaining extra calories and ultimately become obese and after spending money on the food items, they then shell out money on gym regimens.

Alain Dagher says, “When you go to the supermarket hungry, every food looks better, your brain assigns a cost versus benefit to every food item. Now, we’ve found that it is ghrelin that acts on the brain to make food more appealing”.

The researchers in this new study have examined further that using functional magnetic resonance imaging (fMRI) helps to measure the brain’s response to food and non food images which follows single-blinded ghrelin infusions. The pictures were showed to 12 people before and after ghrelin administration, and to 8 others the same pictures were shown in the form of two identical blocks without receiving ghrelin.
The effect was that there was increased response to food pictures because of ghrelin and in other areas of brain involving salience and hedonic incentive value of visual cues, including the amygdale, orbitoforntal cortex, insula, visual areas, and striatum; discovered by the researchers.

Dr. Alain explained, “These areas work together to assign incentive value to objects in the world and to actions, and exert very powerful control over our behavior. They are all targets of addictive drugs (like cocaine and nicotine), and are also targets of feeding signals like ghrelin”.

Dagher adds, “Ghrelin has widespread effects. It’s not one or two brain regions, but the whole network. [After ghrelin infusion], food pictures become even more salient–people actually see them better. It influences not only visual processing, but also memory. People remembered the food pictures better when ghrelin was high”. The study even instituted that the reward centers associated to ghrelin are also involved in drug addiction.
Alain said in a release, “That shows it’s reasonable to think of high-calorie food as having addictive potential”.

The Montreal research has suggested that some kind of treatments should be used that will not only disrupt ghrelin which could help obese people, but also treat influences to the brain’s pleasure centers. Dagher warns that there would be some side-effects on the moods of the people.