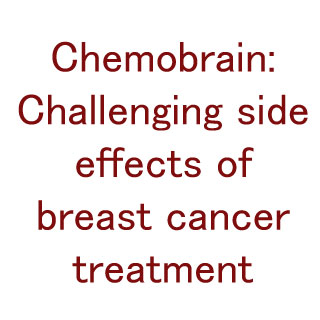 It is said that one of the most challenging side effects of breast cancer treatment is the chemobrain. It may consist of a variety of symptoms which may include memory loss, failure to concentrate, trouble in thinking and other slight cognitive changes following chemotherapy. All this may gravely reduce women’s quality of life and every day functioning. Consequently, they may have to assume a range of coping strategies to apparently run their limited social and professional lives.

In a study, the effects of cognitive impairment that may have on a women’s work, social network and dealings with the health care profession is explained. Dr. Saskia Subramanian from the UCLA Center for Culture and Health in the US and her colleagues conducted this study.

Even though lot of women end up surviving breast cancer, it does not come easy. The mild cognitive impairment following chemotherapy, called as ‘chemobrain’ or ‘chemofog’ is said to be one of the most generally reported post-treatment symptoms by breast cancer survivors. Dr. Subramanian and her colleagues demonstrated that this deterioration in brain function may have destructive effects on the quality of life of the breast cancer survivors.

Approximately 74 women underwent focus groups and in-depth interviews for the study. These women had apparently finished their course of cancer treatment at least a year before. The data on patient’s medical background, treatment experience, post-treatment symptoms, responses from medical staff and from family and friends, self-management, strength of social networks and their observation of themselves was apparently gathered by the experts.

A variety of cognitive changes was apparently found to be frustrating and upsetting by the women. Some of them were unable to retain material or absorb new information and they apparently accepted that they were not performing properly as they once did. Some of them could not handle much of independence and they could manage only some responsibilities. These changes apparently frightened the women, made them reliant and emotionally drained. For some of them, coping may mean having to curtail on work and social activities. Others had more or less acknowledged the limitations and reconciled themselves to a reduced cognitive capacity.

Almost all the women supposedly protested about the lack of acknowledgement from the medical community when they pointed out their chemobrain symptoms. Many women were of the opinion that should have been given some warnings and apparently only some got answers from their physicians. Some women felt that chemobrain could confuse their families and friends, and especially young children.

The authors mentioned, “These data underscore the very serious ways in which chemobrain can affect the life experiences of cancer survivors – emotionally, psychologically and economically. A clear understanding of the cognitive impairments experienced by survivors will aid researchers in developing targeted therapies and interventions aimed at improving or mitigating these post-treatment side effects.”

Chemobrain apparently also affected women’s performance at work. Since they were unable to concentrate, duties became harder and frequently took longer time to finish. This apparently affected their competence and decreased the odds of promotion or assignment to projects.

This study was published in the Journal of Cancer Survivorship.