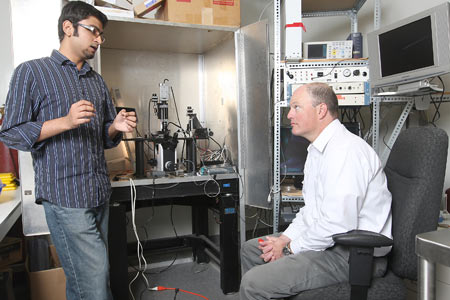 Now-a-days scientists seem to be developing multi-purpose devices that may be capable of performing various tasks with regards to health. Following suit, researchers from Purdue University have apparently developed a fiber-optic sensor which may measure oxygen intake. But at the same time, it apparently has many extensive applications ranging from plant root development to evaluating the effectiveness of chemotherapy drugs.

It is claimed that this device is said to be non-invasive, can apparently convey real-time data, holds a calibration for the sensor’s lifetime and supposedly doesn’t consume oxygen like conventional sensors that may compete with the sample being measured. This device was developed in the lab of Marshall Porterfield, who is an associate professor of agricultural and biological engineering.

Porterfield commented, “It’s very sensitive in terms of the biological specimens we can monitor. We don’t only measure oxygen concentration, we measure the flux. That’s what’s important for biologists.”

It was alleged that the sensor could be extensively used across disciplines. Tumor cells, fish eggs, spinal cord material and plant roots are some of the things that are apparently included in the test. This was claimed by Mohammad Rameez Chatni, a doctoral student in Porterfield’s lab.

Chatni is of the opinion that cancerous cells may usually intake oxygen at higher rates as compared to healthy cells. Gauging how a chemotherapy drug may affect oxygen intake in both kinds of cells may inform the researchers if the treatment was successful in destroying tumors while leaving health cells untouched.

This device might be of relevance to plant biologists. This is mainly because the sensor will apparently measure oxygen intake of a hereditarily engineered plant’s roots to gauge its capability to stay alive in diverse kinds of soil.

Chatni mentioned, “This tool could have applications in biomedical science, agriculture, material science. It’s going across all disciplines.”

The sensor is apparently formed by heating an optical fiber and then tearing it apart to supposedly generate two pointed optrodes which are around 15 microns in diameter. They are claimed to be about one-tenth the size of a human hair. A membrane apparently comprises of a fluorescent dye that may be positioned on the tip of an optrode.

Oxygen may attach to the fluorescent dye. The dye apparently gives out red light back, when a blue light is supposedly passed through the optrode. The intricate analysis of that red light apparently exposes the concentration of oxygen which may be there at the tip of the optrode.

The optrode may alternate between two points, where one may be just above the surface of the sample and another a small distance away. Based on the disparity in the oxygen concentrations, known as flux, the quantity of oxygen being taken in by the sample could be measured. According to Porterfield, it is apparently the intake or oxygen transportation that may be imperative to understand.

Porterfield mentioned that by just knowing the oxygen concentration in or around a sample will not necessarily correlate to the underlying biological processes going on. He believes that his later work may center on changing the device to gauge things like sodium and potassium intake as well.

This device was released on the early online version of the journal The Analyst.