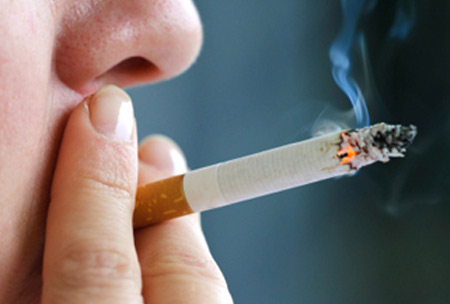 Not many people know that smoking may apparently reduce the appetite and thus suppress weight gain. An investigation conducted by a team of scientists led by Yale School of Medicine reveals the mechanism of nicotine in suppressing hunger which may eventually pave way to developing a drug that would help quit smoking without gaining weight.

It was seen that nicotine apparently sets a group of neurons in a section of the hypothalamus to the activation state. This section then signals that the body has had its share of food. Nicotine seems to achieve this by putting a different set of receptors to activation other than those which increase the need for smoking.

“Unfortunately, smoking does keep weight off. Many people say they won’t quit smoking because they’ll gain weight. Ultimately, we would like to help people maintain their body weight when they kick the habit and perhaps help non-smokers who are struggling with obesity,” specified Marina Picciotto, the Charles B.G. Murphy Professor of Psychiatry, professor of neurobiology and pharmacology and senior author of the paper.

The scientists tried to put forth the functions of nicotinic acetylcholine receptors, these which are located in the brain are apparently the principal targets of nicotine. When the researchers were examining a specific drug for depression that works on these receptors, it came to fore that mice who were administered the drug seemed to eat less than those who didn’t receive the medicine.

As scientists thought of tracking the reason behind this, it was noticed that the drug seemed to activate a particular kind of nicotine receptor, which subsequently made the subset of neurons in the hypothalamus pro-opiomelanocortin or POMC cells reactive.

As a part of the research when mice received nicotine, it was revealed that mice devoid of the POMC pathway didn’t seem to lose weight when compared to those who had an intact pathway. It also seemed that these receptors were of a different kind than those which are known to accelerate tobacco urges in smokers. Picciotto concluded that this research seemed to show that appetite suppression was possible without triggering the brains reward centers.

The research is published in the June 10 issue of the journal Science.