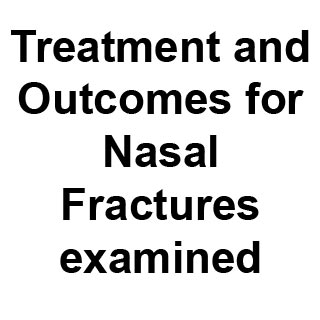 A nasal fracture is normally referred to as a broken nose. It is a fracture of the bone or cartilage of the nose. In a nasal fracture, both minimally invasive and conventional open approaches could mend the nose, as long as the process is coordinated to the individual fracture. This is claimed by a study. A treatment algorithm based on reasons like fracture type and extent of septal deviation i.e. dislocation of the bone and cartilage separating nostrils might assist surgeons in selecting the suitable treatment.

The treatment of nasal fractures is apparently controversial among surgeons, even though they are common. This is the background information provided by the authors. Some surgeons advocate no intrusion at all, while others may prefer extensive open surgery via rhinoplasty techniques. Treatment is usually separated into closed reduction i.e. minimally invasive repair or open reduction techniques.

The authors mentioned, “Deciding which technique to use for a given nasal fracture can be challenging. Not all fractures can be treated using closed techniques and, conversely, not all fractures require the time and expense of an open reduction.”

About 86 patients were examined by Michael P. Ondik, M.D., and colleagues at Penn State Hershey Medical Center, Hershey, Pa. These patients had apparently received treatment for nasal fractures. Out of which around 41 had closed treatments and approximately 45 had open treatments, at the facility between 1997 and 2007.

Fractures were apparently categorized as one of five types, revision rates were supposedly gauged for every group. Pre- and post-operative photographs were apparently rated and available patients were asked about aesthetic, functional and quality of life issues.

The authors remarked, “There was no statistical difference in revision rate, patient satisfaction or surgeon photographic evaluation scores between the closed and open treatment groups when fractures were treated in the recommended fashion.”

A treatment algorithm that supposedly deems fracture type, whether the fracture is impacted where bone fragments are stuck together or incomplete and the extent of septal deviation and whether preceding treatments have been unsuccessful could aid surgeons to decide the best approach to every individual fracture.

The authors quoted, “A successful management algorithm should provide each patient with an aesthetically and functionally superior repair, leaving the most invasive repairs for only those patients who require it and allowing simple fractures to be managed relatively conservatively. Our results validate this approach and effectively ‘even out’ the outcomes between the open and closed groups.”

The authors concluded by mentioning that they believe that their classification system and management algorithm represents a new paradigm in nasal fracture management.

This study was published in the issue of Archives of Facial Plastic Surgery, one of the JAMA/Archives journals.