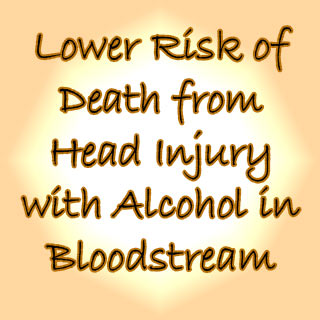 Consuming alcohol excessively may not be good for health. This statement has been dealt with several times. But a new study claims that alcohol may sometimes save your life. It is alleged that people with ethanol in the bloodstreams seem less likely to die after a moderate to severe head injury.

Every year, approximately 2 million Americans apparently sustain traumatic brain injuries and around 56,000 people may die due to the injury. The authors provided this bit of news as background information. Over the years, alcohol use had apparently been implied as a risk factor for all kinds of trauma and almost half of the patients are believed to be drunk when they are injured.

The authors commented, “”Despite these associations between alcohol and trauma, very little is known regarding the pathophysiologic implications of ethanol on traumatic brain injury. Experimental animal studies suggest that ethanol may have a neuroprotective effect, though results are conflicting.”

The data from about 38,019 patients were examined by Ali Salim, M.D., of Cedars-Sinai Medical Center, Los Angeles, and colleagues. These patients suffered from moderate to severe traumatic brain injuries whose blood ethanol levels were apparently tested on admittance to the hospital between 2000 and 2005.

The authors mentioned, “The decrease in mortality was tempered by an apparent increase in complications for patients with positive serum ethanol levels, a finding consistently reported in the literature.”

It is apparently not known as to how ethanol may be linked with a decreased possibility of death among patients with brain injuries.

Other animal studies, apparently signify a connection between ethanol and decreased survival.

The authors quoted, “The sociologic implications are important and have been raised previously. It is important to note that we examined in-hospital mortality as our outcome measure. It is well established that alcohol contributes to nearly 40 percent of traffic fatalities and the risk of dying is obviously increased while driving under the influence. However, the finding of reduced mortality in traumatic brain injury patients with pre-injury ethanol raises the intriguing possibility that administering ethanol to patients with brain injuries may improve outcome.”

It may be seen that additional studies could be required to probe into the mechanisms behind this link and probable therapeutic implications.

This study was published in the issue of Archives of Surgery, one of the JAMA/Archives journals.