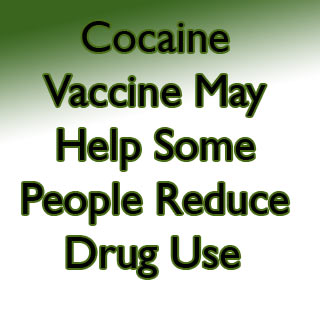 A study claims that a vaccine to treat cocaine dependence seems to decrease use of the drug in a subgroup of people who could get high anti-cocaine antibody levels in response. Nonetheless, only about 38 percent of vaccinated individuals apparently generated high enough antibody levels and those who did supposedly sustained them for only around two months.

Roughly 2.5 million Americans are said to be addicted to cocaine but only about 809,000 supposedly receive treatment. This is as per the background information provided by the authors. One of every three drug-related emergency department visits could be credited to cocaine dependence, which may also have extensive social and economic effects.

The U.S. Food and Drug Administration have apparently not accepted any pharmacological therapies for cocaine abuse, and behavioral therapies could have a broad range of efficacy. Animal and human studies have claimed that high levels of anti-cocaine antibodies in the blood may seize and inactivate cocaine before it could penetrate the brain. It may decrease feelings of ecstasy from the drug without causing any psychoactive effects or damaging connections.

A 24-week phase 2b trial of a vaccine intended to augment levels of cocaine antibodies in the blood was conducted by Bridget A. Martell, M.D., M.A., of Yale University School of Medicine, New Haven, and Veterans Affairs Connecticut Healthcare System, West Haven, and colleagues. A sum of about 115 cocaine-dependent individuals was enlisted and about 58 were randomly given five vaccinations of the active vaccine. The other 57 apparently received placebo injections over 12 weeks. In both groups combined, about 94 people finished the trial. The urine of the subjects was supposedly examined for metabolized cocaine. This was apparently done for three times per week, for around 24 weeks.

Of the 55 participants who finished five active vaccinations, about 21 achieved blood cocaine antibody levels of around 43 micrograms per milliliter or more. These people apparently had more cocaine-free urine samples between weeks 9 and 16 of the study as compared to people who did not achieve those antibody levels or who were given placebo injections.

The authors commented, “Optimal treatment will likely require repeated booster vaccinations to maintain appropriate antibody levels. Furthermore, efforts will be needed to retain subjects during the initial series of injections since antibody levels increased slowly over the first three months when patients were immunized according to the protocol used in these studies. Other treatments need to be used during this early treatment period to encourage abstinence. As an example, to retain subjects in this study during the initial slow increase in antibody responses, we enlisted cocaine-dependent subjects who were enrolled in a methadone maintenance program.”

The authors added, “Thus, the goals for future vaccine development will be to increase the proportion of subjects who can attain the desired antibody levels and to extend these periods of abstinence through long-term maintenance of these adequate antibody levels.”

Unfavorable events linked with the vaccine were said to be mild or moderate, with the most common being hardening and tenderness at the injection site. No treatment-related grave unpleasant events, withdrawals or deaths took place.

It is published in the Archives of General Psychiatry, one of the JAMA/Archives journals.