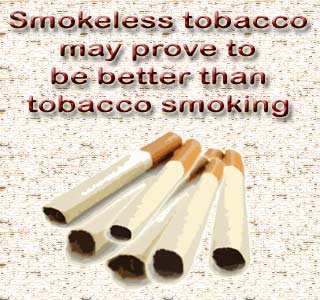 It’s a known fact, that smokers in spite of having knowledge about the ill effects of smoking, can’t make themselves kick this fatal habit for good. Numerous techniques and approaches have been adopted with the purpose of aiding smokers to quit smoking. However neither of them have entirely succeeded in their aim. Another novel methodology has evolved by a latest study that says if smoker’s switch to smokeless tobacco it has shown to have positive effects in the past. This technique is not entirely risk free; however it has lower harmful effects as compared to normal cigarette usage.

According to a study by the University of California, San Diego and the Karolinska Institutet, Sweden, there are a lot of variations as to the method that people use and quit tobacco in both Sweden and U.S. Earlier studies on smokeless tobacco in Sweden have yielded positive results; however it is believed that they may not produce similar results in the U.S. as well. In order to evaluate the U.S. results, a survey was conducted twice, on more than 15,000 subjects in the U.S.

Shu-Hong Zhu, PhD, Professor of Family and Preventive Medicine, UCSD School of Medicine, says that, “In Sweden, many smokers have quit smoking by switching to snus. This has piqued a lot of interest, because anything that helps people quit cigarettes could have huge benefits due to the great harm caused by smoking.”

Also, Hans Gilljam, MD, a Professor at the Karolinska Institutet, says that, “Historically, there has been no campaign to promote snus to Swedes as a safer alternative to cigarettes. But snus has been popular among male smokers, and has helped them quit cigarettes. In fact, Swedish men have a higher smoking cessation rate than Swedish women, few of whom use snus.”

The investigators say they didn’t find similar results in the U.S. as well. But it was noticed that U.S. men, unlike Swedish men, had a higher rate of quitting smoking, in spite of a higher use of smokeless tobacco usage in Sweden.

These revelations are considered crucial, because then accordingly smokeless tobacco may be considered for promoting as a safer and less harmful alternative to tobacco smoking.

The study appeared in the online issue of Tobacco Control.