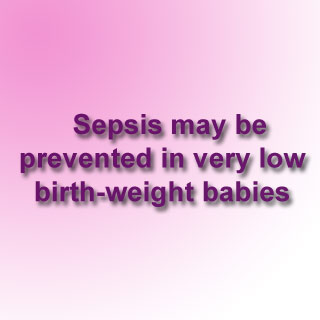 Sepsis is said to be a grave medical condition characterized by a whole-body inflammatory state. The body may develop this inflammatory reaction to microbes in the blood, urine, lungs, skin, or other tissues.

A study claims that extremely low birth newborns that were given the milk protein lactoferrin alone or in combination with a probiotic apparently had a decreased occurrence of late-onset sepsis.

The authors mention that infections are the most common cause of death in premature infants and a major threat for poor outcomes. Late-onset sepsis, i.e., infections occurring after the perinatal period, mostly take place in the hospital and may impact about 21 percent of very low birth-weight (VLBW) babies. This was provided as background information.

VLBW may be described if the baby’s weight are less than 3.3lbs. Bovine lactoferrin i.e. a milk glycoprotein may hamper the development of an extensive variety of bacteria, fungi, and viruses and has apparently been demonstrated to display even higher in vitro antimicrobial activity as opposed to human lactoferrin. Whether lactoferrin could decrease the occurrence of sepsis is not known. In animal tests, the probiotic Lactobacillus rhamnosus GG (LGG) apparently enhanced the activity of lactoferrin but has not been examined in infants.

Paolo Manzoni, M.D., of S. Anna Hospital, Torino, Italy, and colleagues inspected whether oral supplementation with BLF alone or in combination with LGG may decrease late-onset sepsis in VLBW neonates.

The trial was performed in about 11 Italian neonatal intensive care units and incorporated around 472 VLBW infants, who were evaluated until discharge for growth of sepsis. About 153 infants were randomly given orally administered BLF alone, BLF plus LGG i.e. was given to 151 or placebo that included 168 from birth until day 30 of life i.e. day 45 for neonates less than 2.2 lbs. at birth. Demographic, clinical and management characteristics of the 3 groups were supposedly alike, counting kind of feeding and intake of maternal milk.

It was seen that about 45 infants had a first episode of late-onset sepsis. The experts discovered that overall, late-onset sepsis apparently transpired less often in the BLF and BLF in addition to LGG groups i.e. 5.9 percent and 4.6 percent, respectively as opposed to the control group i.e. 17.3 percent. The reduction took place for bacterial plus fungal episodes. The sepsis-attributable threat of death was supposedly lesser in the two treatment groups. No unfavorable effects to treatment apparently took place.

The authors commented, “Prevention of neonatal sepsis relies on hygiene measures, cautious use of invasive procedures, medication stewardship, administration of fresh maternal milk, and early diagnosis. Nevertheless, none of these interventions is fully effective in decreasing the burden of the disease and overall have not been subjected to randomized controlled trials. This study has demonstrated that supplemental BLF, either alone or in combination with LGG, reduces first episodes of late-onset sepsis in VLBW infants.”

So through the study it was seen that milk protein supplement may help prevent sepsis in very low birth-weight infants. This news may relieve expecting parents.

This study was published in the October issue of JAMA.