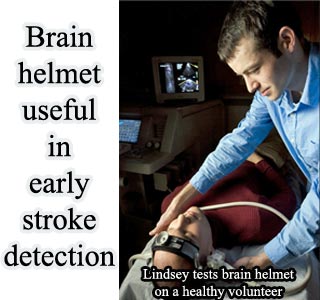 A team of Duke University bioengineers have developed a prototype brain helmet which is said to be capable of giving a three dimensional color movie of the vessels and blood flow within the brain. This may aid the right personnel in performing immediate scans of a potential stroke victim’s brain.

It is said that the most common type of stroke occurs due to a blockage in the brain vessel. A special drug has to be given after the visibility of stroke’s initial symptoms. But before prescribing this drug, the patient’s brain has to be scanned in order to verify that the stroke is not a result of bleeding in the brain. It is said that time is of great value for the treatment of potential stroke patients. Disability or even fatality of the patient may depend on an immediate diagnosis and treatment.

These engineers, using their previously developed 3-D ultrasound technology, designed a model device or the “brain helmet.” This prototype device places ultrasound transducers on the temples of both the sides of the head. Duke graduate student, Brooks Lindsey designed a system so that a computer could bring together both the stream of ultrasound images and produce 3-D real-time images of the brain’s major blood vessels. In contrast to an average four hours taken by a CT scan, the brain helmet scan takes only about 15-30 minutes.

Stephen Smith, director of the Duke University Ultrasound Transducer Group, and research member, says that, “We can foresee a time in the near future when the brain helmet could transmit its images from a remote hospital, or from an ambulance, through cellular networks or the Internet to the neurological team at a stroke center. Speed is important because the only approved medical treatment for stroke must be given within three hours of the first symptoms.”

This brain helmet was tested on two healthy volunteers, in order to determine its ability to provide clear images of the major brain vessels. These researchers along with a clear view of color real-time blood vessels images could also see the direction of the blood flow. This is believed to be of great assistance for accurately locating the stroke location.

These researchers are now in the midst of developing a prototype that cuts down on the size of the device’s components and enhances the signal effectiveness from the transducers.

Their findings are presented at the Society of Photo-Optical Instrumentation Engineers’ annual Medical Imaging scientific sessions in Orlando, Fla.