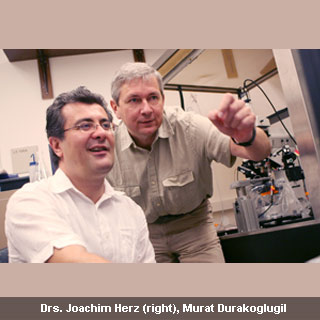 According to the experts from the UT Southwestern Medical Center, the action of a small protein which is a main villain in Alzheimer’s disease may possibly be balanced with another brain protein. The study seems to suggest a promising novel method against the devastating illness.

The harmful protein called beta-amyloid is known to be found inside the brain. In addition, when it functions properly it seems to suppress nerve activity involved with memory and learning. Apparently, its usual function can be compared to a red traffic light, controlling nerve cells from getting overexcited when they receive stimulating signals from neighboring cells. However, people with Alzheimer’s disease seem to gather too much beta-amyloid where the traffic light gets stuck on ‘red’ and nerve cells become less responsive.

“If we can identify a mechanism to keep the nerve cells functioning strongly, that might provide a way to fight Alzheimer’s disease,” says senior author of the study, Dr. Joachim Herz, professor of molecular genetics and neuroscience at UT Southwestern.

In the study, the experts recorded electrical currents in the mouse hippocampus, an area of the brain associated with learning and memory. From their experiments they established that Reelin and beta-amyloid appear to interact with the same protein complex, called an NMDA receptor. This NMDA receptor is believed to play a vital role in coordinating chemical signals between adjacent nerve cells.

The findings revealed that Reelin seems to activate and strengthen the response of the NMDA receptor. In the presence of extra beta-amyloid, the receptor appears to travel into the cell thereby reducing the cell’s sensitivity to incoming signals. By contrast, in strong concentrations of Reelin, the receptor is noted to remain active and the cell gets the green light to continue receiving normally.

Dr. Herz claimed that the study is particularly important because this mechanism seems to involve another protein involved in Alzheimer’s called ApoE4. Supposedly, ApoE4 is the primary risk factor for the most common late-onset form of the disease.

It was observed that the receptor which binds to ApeE molecules also binds to Reelin. Moreover, it is a part of the red-light or green-light complex which may possibly control the sensitivity of the NMDA receptors.

Dr. Herz further elucidated that, “These results imply that Reelin, ApoE and beta-amyloid converge on the same molecular mechanism, which is critical in the Alzheimer’s disease process, and Reelin may be a common factor to fight both beta-amyloid and mutated ApoE. This study establishes a rationale that ApoE receptors have an action that can keep the Alzheimer’s disease process at bay by preventing damage in the first place.”

At present, experts are examining the role of ApoE4 in this mechanism. Dr. Herz stated that mimicking or preserving normal Reelin function in order to stimulate the ApoE receptors could possibly provide a path to stave off the disease.

The findings of the study have been published in the journal Proceedings of the National Academy of Sciences.