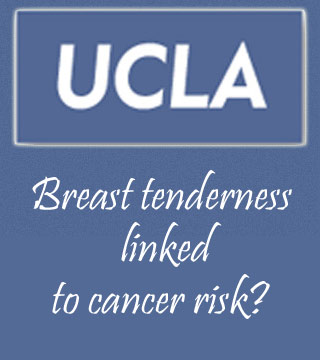 A latest UCLA study makes a shocking revelation that women who have developed new-onset breast tenderness after beginning estrogen in addition to progestin hormone replacement therapy seem to be at considerably higher risk for developing breast cancer as compared to women on the combination therapy who didn’t experience such tenderness.

This study is believed to have been based on information from more than 16,000 participants in the Women’s Health Initiative estrogen-plus- progestin clinical trial. Apparently, this trial was suddenly stopped in July 2002 when study experts found that healthy menopausal women on the combination therapy had a high risk for invasive breast cancer.

During this study, experts were noted to compare the every day use of oral conjugated equine estrogens of 0.625 mg in addition to medroxyprogesterone acetate of 2.5 mg, or CEE+MPA, with the daily use of a placebo pill. Of the participants in the trial, nearly 8,506 took estrogen plus progestin and about 8,102 were given placebos.

Participants were believed to have undergone mammography and clinical breast exams at the start of the trial and yearly thereafter. Self-reported breast tenderness appears to have been assessed at the beginning of the trial and one year later, and invasive breast cancer over the next 5.6 years was confirmed through medical record analysis.

Lead author of the new study, Dr. Carolyn J. Crandall, a clinical professor of general internal medicine and health services research at the David Geffen School of Medicine at UCLA said that investigators do not know why breast tenderness signifies increased cancer risk among women on the combination therapy.

The findings revealed that women on the combination therapy who did not have breast tenderness at the trial’s inception were found to have a threefold high possibility of developing tenderness at the one-year mark in contrast to the participants who were assigned placebos i.e. 36.1 percent against 11.8 percent.

“To our knowledge, no prior published studies have addressed whether there is an association between CEE+MPA–induced new-onset breast tenderness and breast cancer risk,” elucidates Crandall.

However, the study is believed to have its own limitations. The data which the experts used assessed breast tenderness only yearly and hence could possibly have underestimated it.

Also, the rates of women withdrawing the combination therapy and switching from placebos to active therapy appear to be comparatively high. However, the study experts were of the opinion that this could have decreased, rather than increased the observed association between new-onset tenderness and cancer risk. Besides these findings are not applicable to other types of estrogen or progestin therapy.

The findings of the study have been published in the Archives of Internal Medicine.