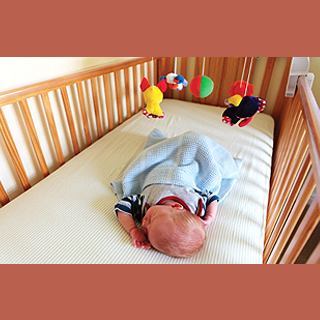 Sudden infant death syndrome (SIDS) is said to be a syndrome marked by the sudden death of an infant that seems to be unforeseen by history and remains unsolved even after a detailed forensic autopsy and a comprehensive death scene investigation. The term cot death is said to be frequently used in countries like United Kingdom, Ireland, Australia, India, South Africa and New Zealand.

A Yale School of Medicine study claims that infants who sleep on their backs appeared to have fewer odds to die from SIDS. Even then, a quarter of all babies, particularly those from African-American descent are not positioned on their backs to sleep.

The study has apparently discovered that mothers who feel their babies are distressed or have more chances to suffocate while sleeping on their backs are more likely to put them in other positions. This could augment the threat of SIDS. It was also seen that mothers who are given steady guidance from physicians, nurses and the media to position their babies to sleep on their backs would probably abide by this recommendation.

Isabelle Von Kohorn, M.D., clinical fellow in the Department of Pediatrics at Yale, and colleagues performed face-to-face interviews between 2006 and 2008 with around 2,299 mothers, majority of who were African–American mothers of babies younger than eight months. The mothers talked about what advice they were given and their personal ideas about infant sleep position.

Van Kohorn commented, “Among mothers at high risk for not placing their infants on their backs, addressing concerns about infant comfort and choking, and increasing the amount of advice mothers receive about putting babies on their backs, should help increase the number of babies being placed on their backs to sleep.”

Roughly 63 percent of mothers were of the opinion that their babies appeared to be most comfortable in a position other than their backs. Approximately 56 percent supposed their infants had more chances to suffocate on their backs.

Van Kohorn mentioned that increasing advice for exclusively back sleep, especially through the media, and addressing mothers’ concerns about infant comfort and choking are critical to getting more infants on their back to sleep.

The study was published in the April issue of Archives of Pediatrics & Adolescent Medicine, a JAMA/Archives journal.