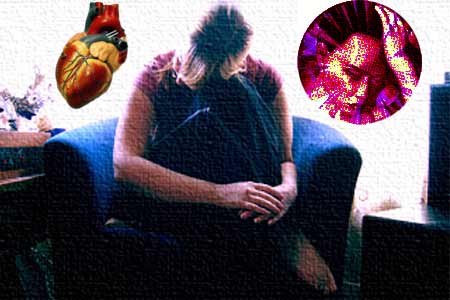 Higher incidences of heart disease, stroke are seen among women who experience migraine with aura if they have a certain gene. Research suggests that the particular gene may put women with migraine at an increased risk of heart disease and stroke. Migraine with aura is the scientific term for neurological symptoms lasting for about 30 mins and often leading to visual disturbances.

Tobias Kurth, MD, ScD, with Brigham and Women’s Hospital and Harvard Medical School in Boston, MA, study author, remarked, “This gene by itself does not appear to increase the risk for overall and for specific cardiovascular disease, but rather this research suggests a possible connection between the gene variant and migraine with aura. While it is too early to start testing young women with migraine with aura for this gene variant, more focused research will help us to understand these complex links and will help us to potentially develop preventative strategies”

He further commented, “Doctors should try to reduce heart disease risk factors and advise young women who experience migraine with aura not to smoke and to consider birth control pill alternatives as these increase the risk of ischemic vascular problems.”

Researchers scrutinized a total of 25,001 Caucasian women to analyze the instances of cardiovascular diseases, including heart attacks and ischemic stroke. Among the participants, around 18 % of the women had a migraine history and 40 % with active migraine reported migraine with aura. A particular gene variant in the methylenetetrahydrofolate reductase gene was also tested in the women.

625 cardiovascular disease events occurred in a 12 year follow up period of the study. The gene variant was prevalent in an estimated 11 percent of the total study population. Analysts revealed that in comparison with women who did not have the gene variant and no history of migraine, women who had both of them had a three times higher risk of suffering from cardiovascular disease. The research further suggested the subjects with both gene variant and migraine with aura were four times more vulnerable to a stroke as against normal healthy women.

In the US, heart diseases are the leading and stroke the third leading cause of death. Hence, women who face these problems need to take a more healthy approach to their lifestyle.

The study is published in the July 30, 2008, online issue of Neurology, the medical journal of the American Academy of Neurology.