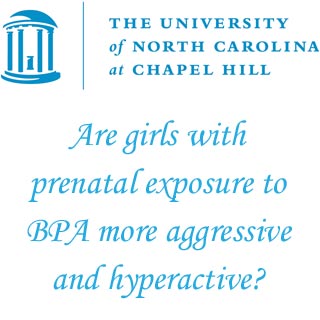 A latest study makes a shocking revelation about aggression in girls. A link between prenatal exposure to the chemical bisphenol A (BPA) and increased violent behavior in girls, but not boys at age 2 seems to have been found. The study goes on to reveal that if a woman is exposed to BPA early in her pregnancy, development of the baby’s nervous system could be adversely affected. This study was conducted by experts from Simon Fraser University, the University of North Carolina at Chapel Hill and Cincinnati Children’s Hospital.

BPA is known to be an ordinary chemical found in some plastics. Supposedly, it is also used in the production of polycarbonate plastics and epoxy resins that can be found in some types of plastic bottles, canned food linings, water supply pipes and medical tubing.

For the purpose of the study, the experts collected urine samples from approximately 249 pregnant women in Cincinnati, Ohio. The urine samples were observed to have been collected at 16 weeks, 26 weeks of pregnancy, and then again at birth. They then measured BPA concentrations in the samples. Subsequently, when the children were 2 years old, behavior problems were believed to have been evaluated with the help of the Behavioral Assessment System for Children-2 (BASC-2).

“Boys’ behavior did not seem to be affected, although there was some evidence of increased internalizing scores among BPA-exposed boys,” continues Braun.

Study experts found that daughters of women who had higher concentrations of BPA in their urine samples during pregnancy seem to be more prone to having aggressive and hyperactive behaviors as compared to children of women with lower BPA levels, particularly if higher exposure was identified earlier in pregnancy.

According to the Centers for Disease Control and Prevention, approximately 93 percent of people in the United States appear to have noticeable levels of BPA in their urine.

Braun said that, “We wanted to know if there was a risk in humans for neurodevelopment problems. Study results indicate that exposure to BPA early in the pregnancy seems to be the most critical issue. The most damaging exposure might happen before a woman even knows she’s pregnant.”

Dr. Bruce Lanphear, professor of children’s environmental health in the Faculty of Health Sciences at Simon Fraser University and the study’s senior author, elucidated that, “Many government agencies and consumers in the U.S., Canada and around the world have expressed concerns about BPA exposure, especially in children. Canada has banned BPA in baby bottles and other baby products, but that might not be sufficient to protect children. Although this is the first study of its kind, it suggests that we may also need to reduce exposures during pregnancy.”

Braun further stated that BPA has been utilized in products for decades, and concerns about its safety appear to be growing in the recent years. Earlier studies in mice have revealed that the offspring of mothers with high BPA exposure during pregnancy seemed to be more violent than offsprings who were not exposed to high prenatal levels of BPA. However, experts fail to understand why girls seem to be affected by the exposure more or differently in contrast to boys.

The findings of the study have been published in the journal Environmental Health Perspectives.