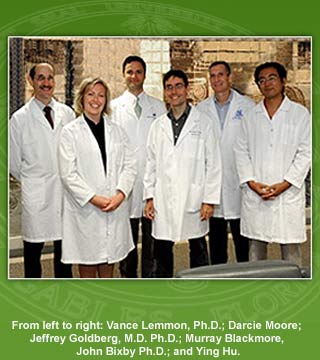 Scientists from the University of Miami Miller School of Medicine seem to have recognized a family of genes which may control the ability of the optic nerve to regenerate. Apparently, the discovery of this gene family is a huge step forward for both visual science and neuroscience.

It was believed that the axons of retinal ganglion cells (RGCs) form the optic nerve. Moreover, RGCs may possibly transmit electrical impulses from the retina to the brain thereby permitting a person to see. RGCs which are damaged or injured could lead to reduced or lost vision.

Supposedly, RGCs were previously thought to be incapable of regenerating. However, RGCs appear to have showed better regeneration in the optic nerve after manipulating one of these newly identified genes.

Senior author of the study, Jeffrey Goldberg, M.D., Ph.D., assistant professor of ophthalmology at the Bascom Palmer Eye Institute stated that, “Neurons in the central nervous system grow normally during development and then they turn off their growth ability, such that they can’t reconnect properly in adults following injury or disease.”

“Scientists have mostly studied the environment where the growth failure occurs, for example, the optic nerve. We were looking to see if there was a problem within the RGCs themselves, rather than in the environment,” continues Goldberg.

Co-author Darcie L. Moore, a graduate student in the neuroscience program working at Bascom Palmer was believed to have screened more than 100 genes looking to find out which would have a role in retinal ganglion cell regeneration.

The study experts seem to have identified Kruppel-like factor-4 (KLF4) as a transcriptional repressor of axon growth in RGCs and other central nervous system (CNS) neurons.

Additionally, collaborator, co-author Murray Blackmore, a postdoctoral fellow at the University of Miami’s Miami Project to Cure Paralysis appears to have found a related gene known as KLF6 in a similar screen on neurons from the cerebral cortex. It was after this discovery, the experts were observed to have expanded their studies in order to look at the complete KLF family.

They found that the entire KLF family may possibly play a role in regulating regenerative ability not only in the optic nerve, but also in neurons inside the brain.

Vance Lemmon, Ph.D., professor of neurological surgery and co-author, stated that, “We are excited because the study gives insight to how genes that control regeneration are turned on and off. In particular, KLF4 seems to be more powerful at inhibiting regeneration than two other KLFs that enhance growth, so future studies need to attack the regeneration inhibitory KLFs.”

Another co-author, John Bixby, Ph.D., professor of pharmacology, claimed that, “It now appears that KLF family members are an important group of regulatory genes for several different classes of CNS neurons.”

The study findings may one day result in progress of treatments for diseases such as glaucoma and optic nerve stroke in addition to spinal cord injury and other neurodegenerative diseases of the brain and spinal cord. Optic nerve stroke is also known as anterior ischemic optic neuropathy (AION).

The study authors anticipate in expanding their studies in order to further improve on optic nerve and spinal cord regeneration. Also, they appear to be wanting to develop methods to translate their findings into human use.

The findings of the study have been published in the journal, Science.

New tool may decide necessity of undergoing a screening for prostate...