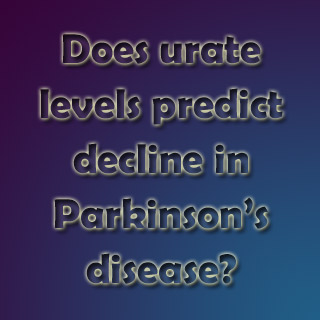 Higher concentration of urate and spinal fluid of patients with early Parkinson’s disease may possibly be associated with lower rates of clinical decline. Atleast this is what a latest study claims.

Urate is known to be an antioxidant which occurs naturally in the blood as an end product of a typical metabolism. Apparently, antioxidants counteract oxygen-related cell damage thereby contributing to the neurodegenerative process in Parkinson’s disease.

Therefore, urate and similar substances could perhaps provide a defense against the development and progression of Parkinson’s disease. Earlier studies have revealed that healthy individuals with higher blood urate concentrations seem to have a lesser possibility of developing the condition.

For the purpose of the study, experts examined nearly 800 individuals with early Parkinson’s disease enrolled in a clinical trial of two medicines for the condition. At the start of the study, between the year 1987 and 1988, urate levels were believed to have been measured in the blood of approximately 774 participants. In addition, cerebrospinal fluid was collected from about 713 of them and then after twenty years the freezer storage for urate was noted to be analyzed.

After two years of follow-up study, the findings revealed that nearly 369 study participants i.e. 48 percent of total 774 patients with blood urate measurements appear to have become disabled. Apparently, they started a therapy with levodopa. Levodopa is known to be a medicine used for treating symptoms of Parkinson’s disease.

The findings also showed that among the 713 participants with cerebrospinal fluid urate levels, about 342 i.e. 48 percent may perhaps have grown to a level of disability requiring levodopa therapy. Additionally, concentration of urate in the cerebrospinal fluid appears to be inversely related to the probability of disease progression.

Alberto Ascherio, M.D., Dr. P.H. of Harvard School of Public Health and Harvard Medical School, Boston, stated that, “Taken together, these data establish urate as the first molecular predictor of clinical progression in Parkinson’s disease and provide a rationale for investigating the possibility that a therapeutic increase of urate in patients with Parkinson’s disease might act favorably to slow the disease course.”

Supposedly, urate levels can be raised through diet, by increasing intake of fructose which are sugars found in fruits or purines found in many meats, foods with yeast and alcoholic beverages. Levels of urate could possibly be increased pharmacologically with inosine, a precursor to urate. Inosine is believed be investigated as a therapy for multiple sclerosis in addition to a novel clinical trial for Parkinson’s disease.

The findings of the study have been published online journal of Archives of Neurology.