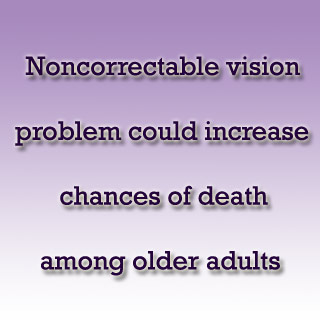 A study claims that visual problems that cannot be corrected are linked to an increased possibility of death among individuals between the ages of 49 and 74, and all visual impairments may be allied with the danger of death in older adults.

Visual impairment has apparently been linked to a higher threat of death plus issues that could result in increased death like accidental injury, depression, lesser body mass index (BMI), decreased walking speeds, augmented possibility of falls, self-reported problem in physical activity, cardiovascular disease, dementia and cancer. This was mentioned as background information by the authors.

Visual impairment in about 3,654 people was examined by Michael J. Karpa, M.B.B.S., B.Sc., of Westmead Millennium Institute, Sydney, Australia. They gathered data from the Blue Mountains Eye Study. The participants were supposedly 49 years and older. They were evaluated between 1992 and 1994 and after five and ten years, the experts assessed the association between visual impairment and death risk among older individuals.

The authors mentioned, “Of mortality risk markers examined, only disability in walking demonstrated a significant indirect pathway for the link between visual impairment and mortality.”

The authors concluded by mentioning that the study reaffirms that visual impairment is associated with an increased risk of all-cause mortality.

The study was published in the October issue of Archives of Ophthalmology, one of the JAMA/Archives journals.