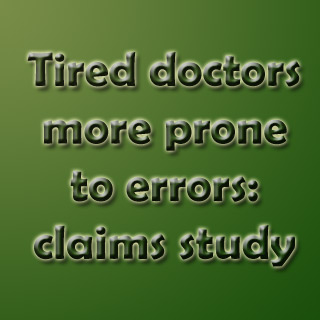 A latest study claims that surgeons and obstetricians or gynecologists who worked during night-time did not have a considerably higher rate of complications for procedures which they performed the next day. However, those having less than six hours of opportunity for sleep between procedures appear to have been linked with an increased rate of surgical complications.

It was observed that there has been an increasing public attention on the role of resident physicians’ tiredness in the frequency of medical errors. In the year 2003, work hour limits seemed to have been applied for resident physicians in the U.S. However, work hours of attending physicians may perhaps be not controlled.

During the study, Dr. Rothschild along with his colleagues was believed to have inspected the relationship between night-time work hours, sleep, and rates of complications in procedures performed the next day.

They examined data on procedures performed from January 1999 through June 2008 by attending physicians which comprised nearly 86 surgeons and approximately 134 obstetricians/gynecologists. Apparently, these attending physicians had been in the hospital performing another procedure which involved adult patients for at least part of the preceding night i.e. from 12 a.m. to 6 a.m. post nighttime procedures.

Moreover, a sum of about 919 surgical and nearly 957 obstetrical post nighttime procedures could perhaps have matched with 3,552 and 3,945 control procedures, respectively. Control procedures were noted to include those of the same type performed by the same physician on days without preceding overnight procedures.

“Among post nighttime cases, a higher rate of procedural complications occurred when there were 6 or fewer hours of sleep opportunity (6.2 percent) compared with post nighttime procedures in which there were more than 6 hours of sleep opportunity (3.4 percent); this was predominantly due to operating room (surgical) complications (8.5 percent vs. 3.1 percent, respectively),” says lead author of the study, Jeffrey M. Rothschild, M.D., M.P.H., of Brigham and Women’s Hospital, Boston.

“For situations in which it is necessary for attending physicians to conduct life-saving procedures following overnight work, effective strategies to minimize the effects of fatigue should be adopted into practice,” concludes Rothschild.

Supposedly, very less has been identified concerning the frequency of elective surgical and obstetrical or gynecologic procedures by attending physicians who participate in emergency procedures the night before. Also, little seems to be known about the risks of complications during these post nighttime procedures.