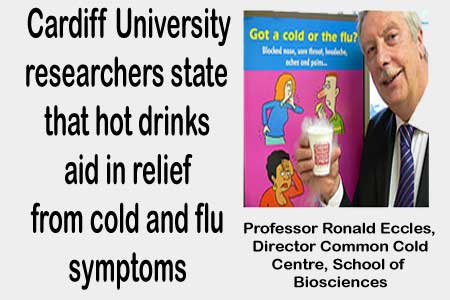 According to a latest research conducted by Cardiff University’s Common Cold Centre, the symptoms of common cold and flu can be significantly reduced by gulping down a hot beverage.

The research conducted at this Centre, reveals that, by drinking an ordinary fruit cordial can immediately, a person is freed from symptoms like cough, a running nose, sneezing, tiredness, chilliness and sore throat for a prolonged period of time. Originated around two decades back, apparently, the Common Cold Centre is said to be, globally, the only centre devoted to researching and testing new drugs for the efficient treatment of cold and flu symptoms.

Professor Ron Eccles, Director, Common Cold Centre, is, supposedly, encouraging all the people suffering from cold or flu to consume hot beverages in order to significantly get rid of their symptoms.

The researchers conducted an experiment on around 30 volunteers. All the participants were suffering from the common cold symptoms. All were given commercially produced cordial apple and blackcurrant drinks. However, some drinks were either “hot” or at room temperature. The researchers compared the effects caused after drinking the respective drinks.

Professor Eccles says that, seemingly, winter is the prime attacking time for cold-viruses. He recommends everyone to store a bottle of fruit cordial, which will come in handy for making hot drinks, which will in turn, “fight off the symptoms of festive cold and flu.” Professor Eccles points out that, this is a very economical as well as a harmless and efficient way to treat cold and flu symptoms.

He is, apparently, astonished that, supposedly, no previous scientific researches have been conducted prior to this, to highlight the positive effect of hot beverages for treating cold and flu symptoms.

The Common Cold Centre is based at School of Boisciences, Cardiff University.

Their findings are published in the Rhinology clinical journal.