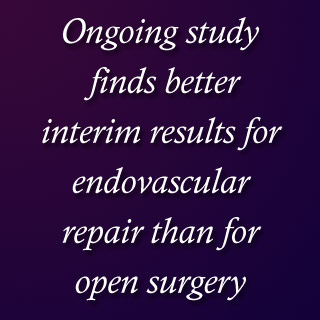 Patients who received the less-invasive endovascular repair of an abdominal aortic aneurysm seemed to have a lower possibility of death in the initial first month after the procedure in contrast to patients who underwent an open repair. However, both procedures appear to have similar rates of death after two years. Atleast this is what a novel study claims.

Every year in the United States, nearly 45,000 patients with unruptured abdominal aortic aneurysm (AAA) are believed to undergo elective repair. Supposedly, this leads to more than 1,400 perioperative deaths. Perioperative is known to be the first 30 days after surgery or inpatient status.

Endovascular repair was noted to have been developed in order to provide a less invasive method as compared to the standard open procedure which involves an abdominal incision. Endovascular repair is known to be performed through a catheter inserted into an artery.

During the study, Dr. Lederle along with his colleagues was believed to be conducting a multicenter clinical trial in order to examine outcomes after elective endovascular and open repair of AAA. This study was noted to be an ongoing 9-year analysis, with this temporary report comprising postoperative outcomes of up to 2 years for about 881 patients who were 49 years or older. Subsequently, patients were randomly selected to either endovascular (n = 444) or open (n = 437) repair of AAA. Average follow-up appears to have been of 1.8 years.

“Hospital and ICU stays were shorter with endovascular repair and need for transfusion was decreased. No significant differences were observed in major morbidities, secondary procedures, or aneurysm-related hospitalizations. Longer-term data are needed to fully assess the relative merits of the 2 procedures,” elucidates Lederle.

The study findings revealed that the rate of death after surgery seems to be considerably higher for open repair at 30 days i.e. 0.2 percent against. 2.3 percent and at 30 days or during hospitalization i.e. 0.5 percent vs. 3.0 percent. However, there appears to be no significant difference in all-cause death at two years i.e. 7.0 percent vs. 9.8 percent.

Moreover, death after the perioperative period may possibly have been similar in the two groups i.e. 6.1 percent vs. 6.6 percent. Patients in the endovascular repair group were observed to have reduced procedure time, blood loss and duration of mechanical ventilation.